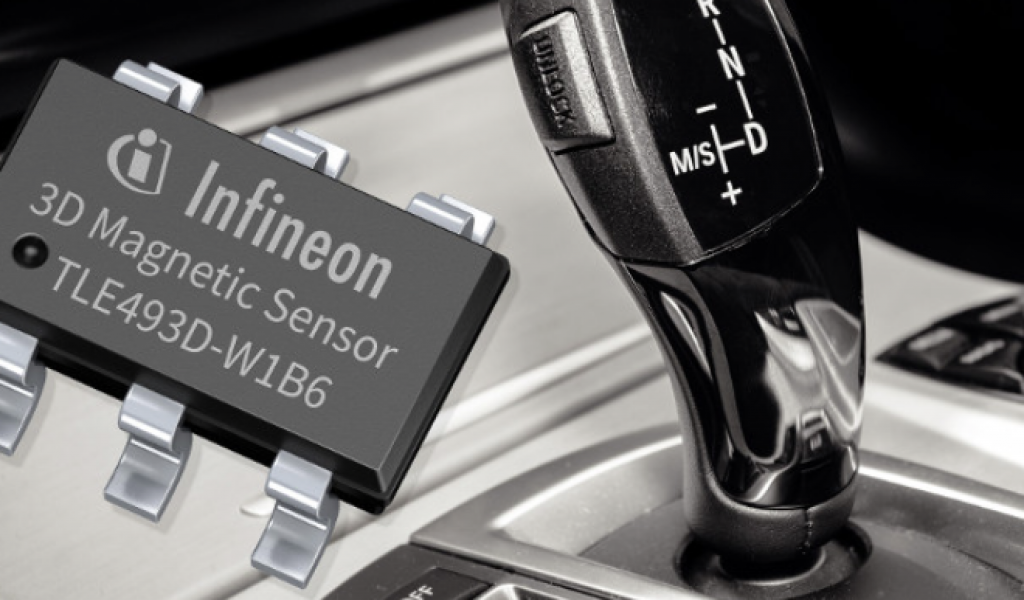 Several innovative, patented concepts were applied in the development of the sensor. Users can define a magnetic field corridor for each magnetic field direction such that if the measured magnetic field lies outside of the corridor, the sensor sends an alert signal to the connected microcontroller. A further development goal was the reduction of power consumption. Thanks to innovative design technologies, such as the energy-saving oscillator, the sensor’s power consumption was reduced to only a few nano Amperes – 7nA when in “power down” mode, for instance. The result is a silicon component that fits into a small package despite its large functional scope. The TSOP-6 case with six pins is only 2.9 mm x 1.6mm – making it smaller than any other 3D magnetic sensor on the market.

Because of its low power consumption and its integrated magnetic field alert, the TLE493D-W1B6 is suitable for use in applications that must detect regular changes in position while using very little power. In addition, it allows the realization of precise, energy-saving system concepts that can be activated by a sensor alert. The sensor’s magnetic field alert, for example, can be used to wake up the microcontroller from its power-saving “sleep” mode. This alert is triggered whenever a change of the magnet’s position alters the magnetic field.

The sensor is equipped with a digital output that uses a two-wire I²C standard interface. This allows high communication speed and bus mode.

Qualified in accordance with the AEC-Q100 automotive standard, the device allows customer systems to comply with the highest quality standards and various environmental regulations. In addition, all relevant ISO 26262 documents are provided in order to fulfill functional safety system requirements.

The power mode control unit serves to distribute energy in the integrated circuit (IC) as well as controlling sensor activation.

The sensor unit, which contains the vertical and horizontal Hall plates and a temperature sensor, measures the magnetic field in the x, y, and z directions. Use of vertical Hall plates for both planar magnetic field components (x and y direction) allows the sensor to achieve outstanding magnetic reconciliation accuracy (±1 %), enabling precise angle measurements. Each x, y, and z Hall plate is connected in series to a multiplexer which is connected to an analog-to-digital converter (ADC). The temperature sensor is also connected to the multiplexer and can be activated if desired.

The microcontroller always has access to the communication unit through an I2C interface and to the register data in order to read out the register values. Values for the three axes and the temperature are stored in separate registers. While the interface fulfills the I2C fast-mode specification (400 kBit/s), an optimized electrical circuit allows data rates above 1 MBit/s to be supported. The sensor can also be used in an I2C bus scheme with other devices in accordance with the I2C protocol guidelines.

During 3D magnetic field detection, the TLE493D-W1B6 offers 12-bit data resolution for every measurement direction. This enables high data resolution of 0.098 mT/bit (least significant bit, LSB), which allows even the smallest movement of the magnet to be measured. Linear measurements of the magnetic field (B) in relation to each of its axes (Bx, By, and Bz) are also possible for the large linear field range (±150 mT). This means an even longer linear magnetic movement (up to 4 cm) can be measured. The large measurement range also enables a simple, robust, flexible magnetic circuit layout.

After each measurement cycle, the sensor transmits a strong interrupt signal to the connected microcontroller, which can then read out the magnetic and temperature values from the registers. The sensor’s interrupt signal can be used to wake up the microcontroller system from its sleep mode. If the entire system is in sleep mode and only activated in the read-out phase, the total power consumption of the system as a whole is reduced dramatically.

The TLE493D-W1B6 can operate in different modes. Individual operating modes vary by their numbers of measurement cycles per second (Figure 3) and the sensor can be set to the desired mode flexibly during operation.

In power down mode, all functional blocks are shut down. In this mode, no magnetic measurements are performed and power consumption drops to 7nA.

In “fast” mode, the readout speed is optimized. While the measurement result is read out, the next magnetic field measurement can be performed. This mode is particularly suited to applications for which very fast magnetic movements must be detected. The sensor’s power consumption is, at most, 3.7 mA at a sampling rate of about 8 kHz, corresponding to 8,000 measurement cycles/second.

A total of eight different “low power” modes have been implemented in the TLE493D-W1B6. In all of these modes, the sensor regularly and autonomously wakes up out of power down mode in order to perform magnetic measurements. The power consumption depends on the number of measurement cycles/second (see Figure 3).

Figure 3: Overview of the eleven different operating modes that can be selected.

In “master-controlled” mode, the sensor can be flexibly read out according to the requirements of the application. After each measurement, the sensor waits until the microcontroller (master) has read out the register. Depending on the application conditions, the read-out process can be performed immediately or with a slight delay. As soon as the microcontroller has detected the magnetic values, a new sensor measurement cycle is triggered. This mode is particularly useful when several TLE493D-W1B6 sensors are connected through an I²C bus for the detection of large linear movements. The microcontroller decides which sensor’s data is most relevant and triggers the corresponding sensor.