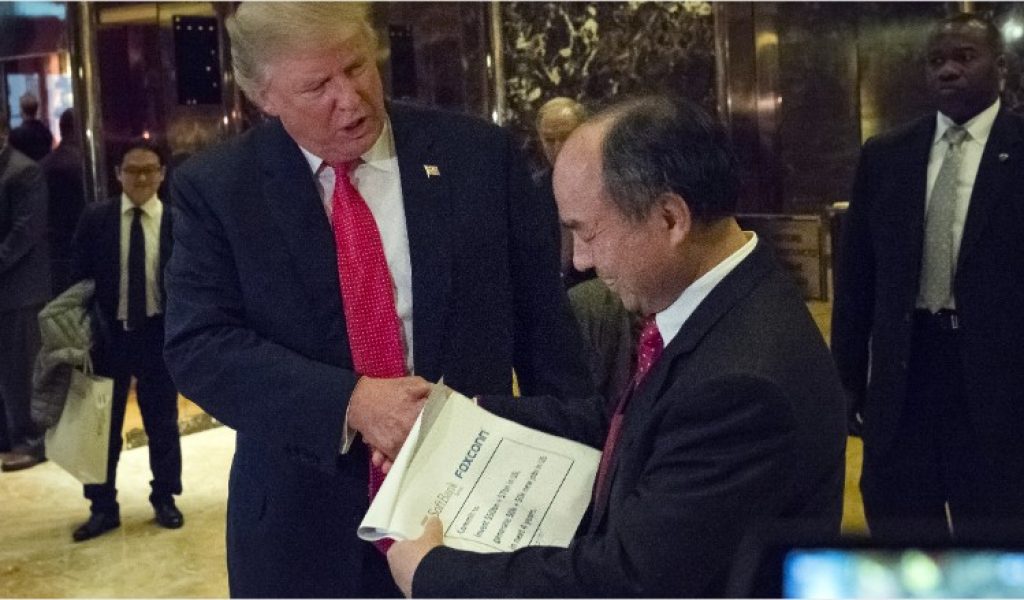 One of Apple’s biggest suppliers says it may spend more than $7 billion to build a new factory on U.S. soil that would create tens of thousands of jobs.

Foxconn is famous for its enormous iPhone assembly plants in China. Its potential investment in the U.S. came to light last month when Softbank (SFTBF) CEO Masayoshi Son was photographed leaving a meeting with Donald Trump. Son was holding a document suggesting Foxconn could create 50,000 jobs.

Over the weekend, Foxconn’s billionaire chairman, Terry Gou, filled in some of the gaps in the plan.

He told reporters that the plan to build a plant for displays was still very tentative, but if it went ahead the investment would exceed $7 billion and could create 30,000 to 50,000 jobs, according to news reports.

Gou singled out Pennsylvania as a possible location, adding that the investment would depend on Foxconn being able to negotiate good rates for land and power. 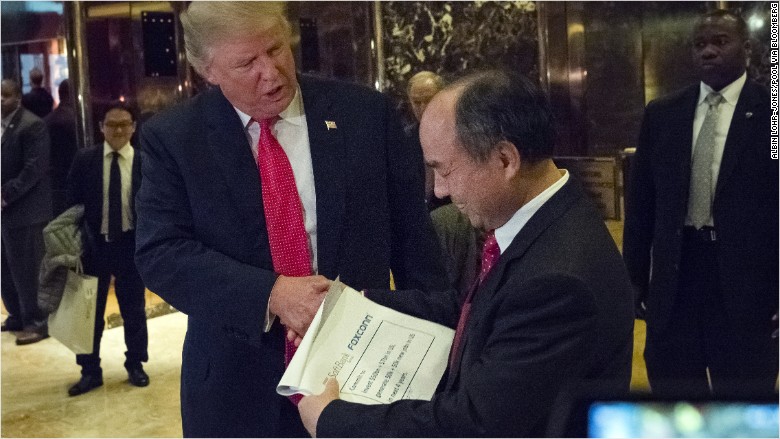 Softbank CEO Son leaving a meeting with Trump in December.

Foxconn, which is based in Taiwan, said it was “conducting an evaluation of the conditions and potential locations for establishing manufacturing facilities in the U.S.” but declined to elaborate on the reports.

“While it is not currently possible to confirm the location for that potential investment or estimate the number of jobs that might be created, it is expected that it would create many direct and indirect job opportunities with the new operation and throughout the supply chain in the U.S.,” the company said.

Softbank’s Son made his own pledge after the December meeting with Trump to invest $50 billion in U.S. startups and create 50,000 jobs. Much of the money is expected to come from a fund SoftBank has already set up with Saudi Arabia.

Gou said he’d spoken to Son before that meeting and thought it was a private conversation — but then his plan was revealed to the world.

“There is such a plan, but it is not a promise. It is a wish,” Gou said, according to Reuters. He said Foxconn had been considering such a move for years, indicating it was not a direct response to Trump’s call for companies to make more products inside the U.S.

According to Japanese publication Nikkei, Gou also said that Apple (AAPL, Tech30) is willing to invest in the new plant. An Apple spokeswoman didn’t respond to a request for comment.