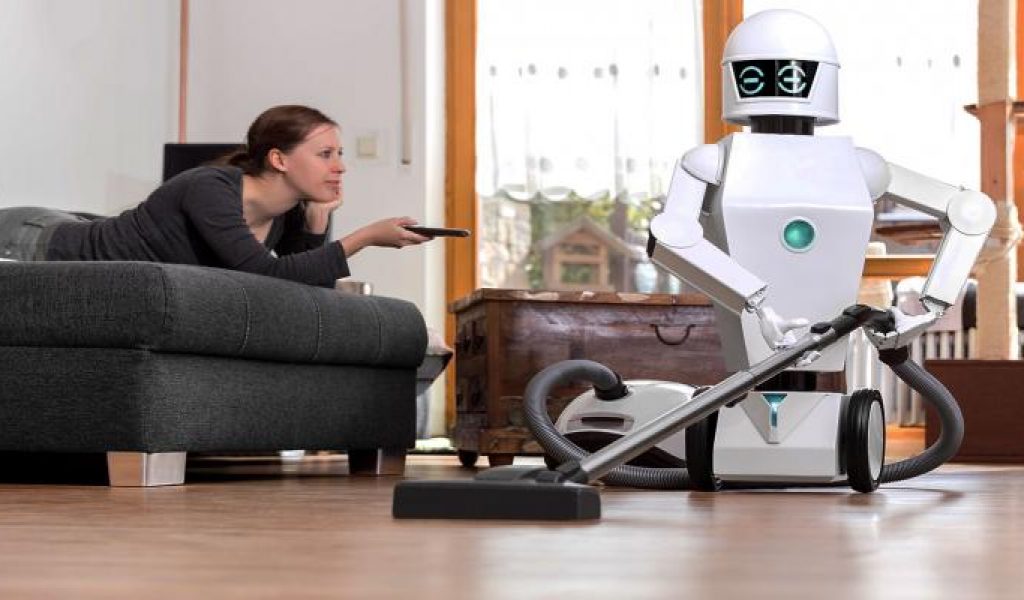 If collaborative robots are called cobots, should these be hobots? Whatever you call them, they are coming sooner than later.

Science fiction writers and technologists have been predicting the arrival of robot butlers for the better part of a century. So far domestic robots have been relatively pedestrian: robot dogs, vacuum cleaners, lawn mowers. Rosie of “The Jetsons” fame? Not so much. That may be about to change. Behind the scenes, big tech companies are funding secret projects to develop robots. Amazon.com Inc. has been working on a robot version of its Echo voice-activated speaker for a while now and this year began throwing more money and people at the effort. Alphabet Inc. is also working on robots, and smartphone maker Huawei Technologies Inc. is building a model for the Chinese market that will teach kids to speak English.

None of these bots are capable of organizing your closet or mixing cocktails, but advances in artificial intelligence, processors and computer vision mean that simpler machines could start appearing in the next two years, according to people familiar with the companies’ stealth programs. Whether or not the robots catch on with consumers right away is almost beside the point because they’ll give these deep-pocketed companies bragging rights and a leg up in the race to build truly useful automatons.

“Robots are the next big thing,” said Gene Munster, co-founder of Loup Ventures, who expects the U.S. market for home robots to quadruple to more than $4 billion by 2025. “You know it will be a big deal because the companies with the biggest balance sheets are entering the game.”

Many companies have attempted to build domestic robots before. Nolan Bushnell, a co-founder of Atari, introduced the 3-foot-tall, snowman-shaped Topo Robot back in 1983. Though it could be programmed to move around by an Apple II computer, it did little else and sold poorly. Subsequent efforts to produce useful robotic assistants in the U.S., Japan and China have performed only marginally better. IRobot Corp.’s Roomba is the most successful, having sold more than 20 million units since 2002, but it only does one thing: vacuum.

More recently, Sony Corp. and LG Electronics Inc. have shown interest in the category. In January at the Consumer Electronics Show in Las Vegas, LG showed off a robot called Cloi, but the demo flopped when the bot failed to obey voice commands. Sony revealed a new version of its robotic dog Aibo, originally unveiled 20 years ago. It doesn’t do much other than bark (although Aibo has been programmed to play soccer). The canine bot also costs $1,800, or about the same price as a real dog from a breeder.

Amazon’s Project Vesta is overseen by Gregg Zehr, a veteran executive and a key leader at the company’s Lab126 hardware division. Kenneth Kiraly, who helped develop the Kindle, helps run the show and has about doubled his team of engineers and developers to roughly 500 since the beginning of the year, according to people familiar with the effort. Now a top priority, Project Vesta has expanded from a single floor at the main Lab126 R&D office in Sunnyvale, California, to a larger, more secure facility, the people said. Amazon has moved people from other projects to the Vesta effort and canceled or pushed back other initiatives, they said.

An early version of Vesta will accompany customers in parts of their home where they don’t have Echo devices. The gadget will likely leverage some of the technology Amazon has used to build its Kiva warehouse robots, one of the people said. Amazon has been investigating ways for either its first robot or a subsequent model to be able to go up and down flights of stairs, this person said. Longer term, the robot could handle more complex tasks such as retrieving items. An Amazon spokesman declined to comment.

Until recently, Alphabet had the grandest ambitions in robotics. The company shocked the industry when it went on a buying spree in 2013, acquiring a dozen robotics companies and dozens of experts. Andy Rubin, a former Google executive who led the effort, departed the company a year later, and nothing of substance has emerged from those efforts. Last year, Alphabet completed the sale of two high-profile units in its robotics division—Boston Dynamics and Schaft—to SoftBank Group Corp. In 2016, Alphabet hired Hans Peter Brondmo, a European mobile executive, to lead its robotics work.

Alphabet’s X division is working on several robotics projects and underlying technology that could, theoretically, make its way to a Jetsons-style home robot. Engineers are exploring the ability for a robot to go up and down stairs, as well as enabling it to open and close doors, a person familiar with the work said. Because the development timeline is so long, five to 10 years, the company hasn’t made the decision about how it will bring the technology to market or if it will be a consumer or commercial machine.A spokeswoman for Alphabet’s X said the company is “optimistic that robotics combined with machine learning can help solve some of humanity’s biggest problems” and that it’s “exploring a range of ways they could have a positive impact in society and on people’s lives.”

Huawei’s home robot’s main purpose is to teach kids English and do live Chinese-to-English translations, according to people with knowledge of the work. The company has sizable teams in San Francisco and Boston working on the project, which could still be abandoned. If Huawei brings the robot to market, it will be specific to China and is unlikely to be released in the U.S. and elsewhere, this person said. Huawei didn’t respond to a request for comment.

Industry experts say Apple probably isn’t currently working on a domestic bot, preferring to focus on commercial machines. In recent months, the company ramped up hiring of robotics experts with a likely focus on automating the manufacturing of future products. Apple is often heavily involved in the design of equipment used for laser etching its products, cleaning metals and applying unique colors like high-gloss black. As its products become more advanced and the company enters new categories like augmented-reality glasses, Apple will need more customized automation equipment to turn prototypes into mass-produced goods.

The robot most akin to the vision big tech is pursuing is probably the Temi, a $1,500 machine that follows its owner from room to room, placing video calls, controlling smart-home devices and other tasks. Temi, the company, said it will begin shipping the bot by the end of the year and hopes to build as many as 30,000 units a month. Anki, a robotics startup that became popular after demonstrating its toy car system at an Apple conference, is launching a new home robot in August, the company said.

Amazon intends to roll out test versions of its robots into controlled environments and employee homes by the end of this year, and then plans a second wider, but still controlled, test as early as 2019, people familiar with the efforts said. A full launch to consumers could happen by 2020.

Amazon is likely the furthest ahead. While Alphabet’s work is still in the early development stage, the e-commerce giant is already talking with manufacturing partners. Charlie Duncheon, a respected robotics and automation expert who once ran robot maker Grabit, said Amazon has an advantage because it can combine the navigation attributes of the Kiva robots scurrying around its warehouses with the voice-activated smarts of Alexa.

But to really change the world, Duncheon said, Amazon and its rivals will have to master articulated arms and hands that can grip objects. Such technology exists and is getting better all the time, but getting the costs low enough for a mass consumer market will take several years. For the time being Rosie will remain nothing more than a cartoon.