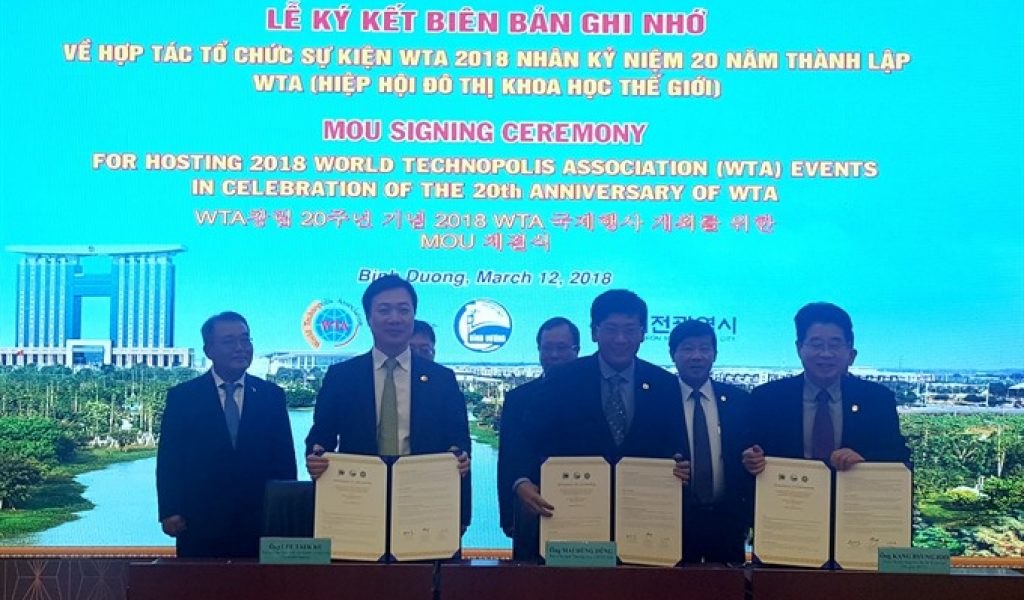 The southern province of Binh Duong has announced it will organise the World Technopolis Association (WTA) Events in October since its capital, Binh Duong City, has just become a member of the association.

There will be the 11th WTA General Assembly & Hi-tech Fair and the 2018 Global Innovation Forum.

“Membership of the WTA and the construction of a smart city would be driving forces to overcome obstacles and turn the city into a modern, sustainable urban area,” Tran Thanh Liem, chairman of the provincial People’s Committee, said in his opening speech at yesterday’s signing ceremony for the memorandum of understanding for hosting WTA Events.

Lee Taek Ku, Director General of Planning and Coordination of Korea’s Daejeon City, said: “I’m very honoured to welcome Binh Duong City as an official member of the WTA, which was established by Daejeon Metropolitan City in 1998 with the purpose of connecting the advancement of science and technology with regional innovation for development.”

Kang Byung Joo, Secretary General of the WTA, said: “It is very meaningful for Binh Duong City to become an official member of WTA, which has 105 members, including cities, research institutes and universities from 47 nations around the world.”

On the same day the MoU was signed a ceremony was held to grant investment certificates to 18 enterprises and sign a land lease agreement for project expansion in the Bau Bang Industrial Park between Becamex IDC and Far Eastern Group.

In the first 2 months of this year domestic and foreign investment have been worth VNĐ10.3 trillion ($450 million) and $435 million.

It is ranked second in terms of FDI attraction behind only HCM City. — VNS