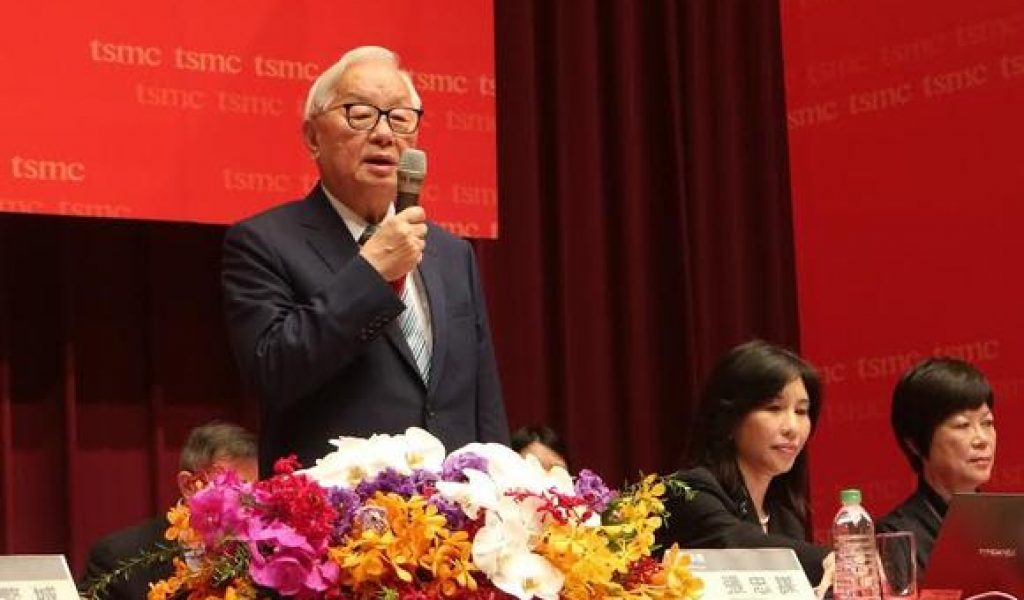 Two co-CEOs elected to the board, move signals succession planning

Chang’s comments at the company’s annual general meeting came amid a wave of consolidation in the global semiconductor industry to boost growth and cut costs as demand for smartphones and other electronics softens.

TSMC, which commands a 56% global market share, had not made any notable acquisitions to date. Conversely, Intel and Samsung Electronics, its two major rivals, are more aggressive in expanding through buyouts.

TSMC announced earlier this year that it had decided against making an offer for the memory chip unit of troubled Japanese conglomerate Toshiba. “Our team studied Toshiba thoroughly for six to seven weeks and talked to every key person,” Chang told shareholders.

TSMC is headquartered in the Taiwanese city of Hsinchu. (Photo by Cheng Ting-fang)

“Even though we eventually decided not to pursue Toshiba as there is no synergy with our long-term strategic growth, we will continue to look for new opportunities from time to time. There are still a lot of good targets out there,” he said.

Toshiba is the world’s no.2 NAND flash memory chip provider, behind Samsung, and counts Apple as a major customer. NAND flash memory is a key component used in various electronic devices, including smartphones, PCs and servers.

TSMC is focused on making advanced semiconductor components including core processors and graphic processors, but not memory chips, for other chip designers or gadget companies.

It enjoys a monopoly in making core processor chips for the new iPhone 8 range to be launched this year. It also supplies to Qualcomm, Nvidia, Broadcom, MediaTek, Huawei Technologies’ chip arm Hisilicon Technologies and some 450 customers worldwide.

Chang said again that his company will outgrow the industry, with a 5% to 10% rise in revenue every year till 2020. But he added that he would never underestimate the escalating competition with Intel and Samsung.

Intel mainly makes chip for its own use under its own brand and it now provides baseband modem chips for iPhones, while Samsung is the world’s no.1 memory chipmaker. Both firms are eager to grow their foundry business and make chips for other customers, a market in which TSMC is the leader.

TSMC’s market capitalization of 5.52 trillion New Taiwan dollars ($183.35 billion) continues to top that of Intel since May. The Taiwanese company’s shares closed 0.71% higher at NT$213, a new record, on Thursday.

TSMC’s strong performance is a main driver for Taiwan’s benchmark index which breached 10,000 points for the first time in 17 years on May 11. It closed at 10,225.78 points on Thursday.

TSMC shareholders voted to elect Mark Liu and C.C. Wei, the two co-chief executives, to sit on the company board at the AGM.

The move marks another step toward picking a successor to 85-year-old Chang. Widely seen as a founding father of the industry, Chang said he was still working closely with Liu and Wei and made decisions together with them.

Liu is responsible for research and development while Wei looks after chip production. The two split the 450 customers between them and take care of different accounts.

For instance, Wei deals with Apple, TSMC’s biggest customer; while Liu is responsible for Qualcomm, the No.2 customer, according to an industry executive familiar with the matter.

Liu’s style is more similar to Chang, who has a sharp eye for detail, according to a chip industry executive and other people who work with him.

“When reporting to Liu, you’d better prepare reference materials to support the points you are making as he demands a lot of details,” the person said.

Wei is known to be more forthright and outgoing. He is also known for having a sense of humor and the ability to handle tough customers like Apple.

“Succession would be a short-term concern for suppliers and the industry as Chairman Chang is an extremely important asset of the company and a guarantee of confidence,” said an industry veteran executive who knows TSMC well.

“But in a long run, we think as long as TSMC can continue to lead in chip technologies and manufacturing like now, there is nothing to worry about at all,” the executive said.

Rick Hsu, an analyst at Daiwa Capital Markets, said TSMC will have a smooth transition as both Liu and Wei are familiar with the strategies of the company.

He sees more upside for the stock this year as it dominates and enjoys growing orders from Nvidia, a chip pioneer in artificial intelligence.

“Whether TSMC can handle its transition well can be very crucial to the company’s future development,” said Mark Li, an analyst at Bernstein Research. “It’s a significant valuation factor that institutional investors would watch very closely.”