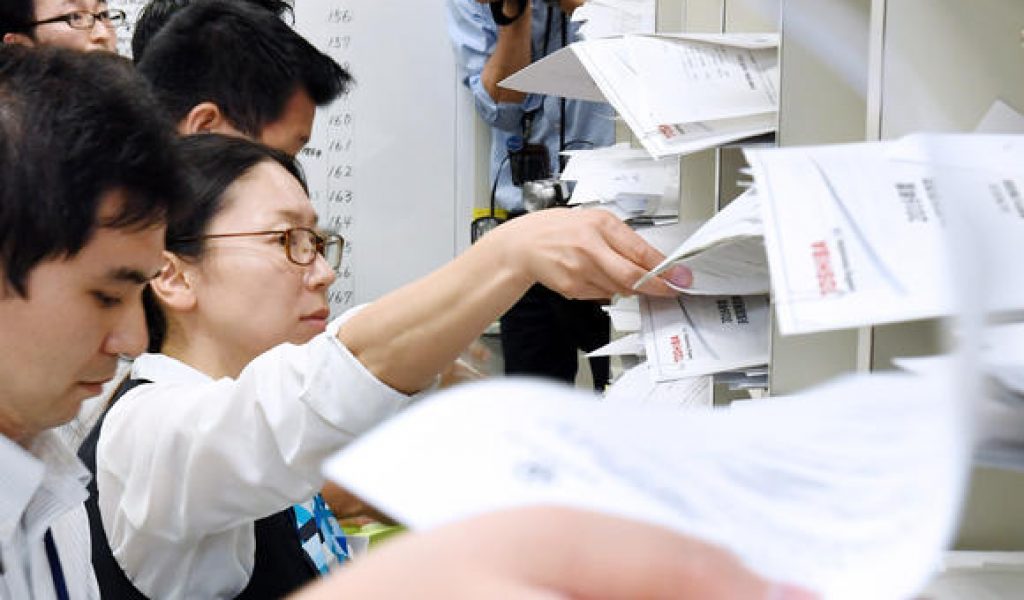 A slowdown in China’s economy could hamper earnings for Japanese companies.

TOKYO — Japanese listed companies aiming to chalk up record earnings this fiscal year will face a host of challenges including overseas slowdowns, notably in China, as well as continuing labor shortages at home. Structural reform and growth through mergers and acquisitions should prove key to their success.

Manufacturing is driving earnings, with 7% profit growth expected for the sector as the global economy recovers despite the lack of a boost from a weak yen.

Tokyo Electron predicts record profit. Orders for chip-making equipment are brisk as demand grows for semiconductors used in smartphones and data centers. In China, the hub for smartphone-related investment, capital spending in electronics manufacturing services is strong in anticipation of the release of Apple’s next-generation iPhone this fall. Robotics company Fanuc sees a rise in orders for robo-drills that can carve out smartphone cases and other products.

China’s growth in infrastructure investment is notable. Demand for hydraulic shovels soared 60% in fiscal 2016 and is expected to increase 6% in fiscal 2017, according to estimates from Hitachi Construction Machinery.

The Chinese government is financing projects, but worries have surfaced that public spending will fall after the Communist Party’s National Congress this fall.

“Chinese copper demand could decelerate in the second half of the year,” said a cautious Naoki Ono, an executive vice president at Mitsubishi Materials.

Meanwhile, the American new-car market is leveling off.

Though North American and Asian sales are expected to grow for Honda Motor, the automaker predicts a shrinking profit due to ballooning sales management costs and development expenses.

Dull growth of just 1% is expected in the non-manufacturing sector for the current fiscal year. The communications field likely will see a profit decline from the previous year, when SoftBank Group booked huge proceeds from stock sales.

But some companies think domestic consumption is rebounding.

“As of February, demand from foreign visitors to Japan is growing although we expected it to be flat,” said Norio Tadakawa, chief financial officer at cosmetics company Shiseido.

However, every company is dealing with inadequate supply capacity due to Japan’s labor shortage. Delivery company Yamato Holdings predicts a second straight year of profit declines as workstyle reforms such as eliminating unpaid overtime raise costs. Nippon Express will pass on price increases from subcontractors to senders.

Securing labor has grown increasingly difficult in construction, retail and nursing. Midtier supermarket company Inageya‘s profit shrunk 30% in fiscal 2016. A shortage of part-time workers increased costs due to overtime pay for full-time employees and hiring of temporary workers from agencies.

Education company Benesse Holdings raised monthly pay for care workers in April by up to 15%. “It will help secure and keep staff,” said CEO Tamotsu Adachi.

Some companies are using the worker shortage as an opportunity. Daifuku, which provides automated systems for logistics facilities, has seen an increase in domestic orders. Labor-saving measures are being taken “not only by large companies, but also among medium and small businesses,” said Masaki Hojo, president and CEO.

The average assumed exchange rate for the current fiscal year is 108 yen to the dollar, in line with the previous year. Corporate growth strategies will be tested now that the tailwind provided by the soft yen last year has blown over. Sumitomo Heavy Industries turned its mobile crane business, a joint venture with Hitachi Construction, into a subsidiary. The acquisition of a boilermaker for biomass power generation is also seen contributing to profit. Operating profit is expected to recover to its highest level in nine years.

Electronics maker Nidec predicts record profit driven by acquisitions. Sonyplans to increase production in response to the growing market for image sensors used in smartphones and other devices. Sony expects operating profit for the current year to reach 500 billion yen ($4.41 billion), near its record.

Clothing retailer United Arrows intends to improve profit through reforms such as narrowing its product selection and reducing unprofitable stores. As the company expands in areas such as e-commerce it plans to establish sustained growth by “continuing to review unprofitable segments,” CEO Mitsuhiro Takeda said.

“The true ability of companies will be tested now that the boost from the soft yen is gone,” said Kazuhiro Takahashi of Daiwa Securities.