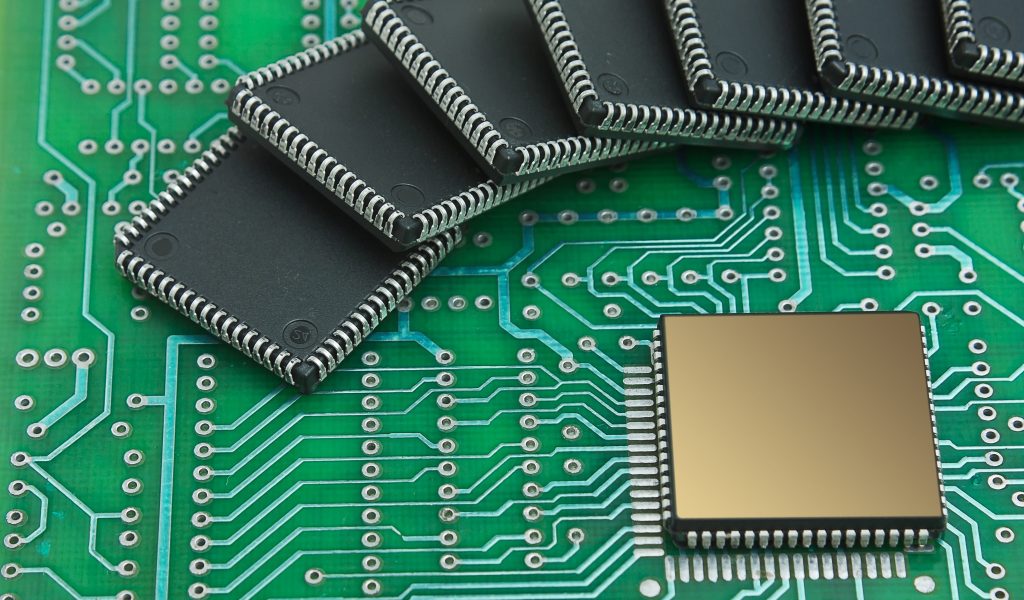 Semiconductors give self-driving vehicles their brains, help servers crunch data and dictate how fast a smartphone can juggle texting and streaming videos. Now, they are also at the front line of Silicon Valley’s biggest battles.

The proliferation of connected devices and big data is handing new clout to chip makers such as Samsung Electronics Co., Intel Corp., Qualcomm Inc. and Toshiba Corp. The result is an unprecedented semiconductor boom, as a flood of demand pushes up prices and gives an advantage to firms that can secure huge quantities of the must-have components.

Prices of two main types of memory chips — one for content storage, known as NAND, and another giving devices their multitasking speed, known as DRAM — have risen 27% and 80%, respectively, from July through March, according to DRAMeXchange, which tracks sales and prices.

Samsung, which has a dominant place in both markets, has benefited: chips represented almost 54% of its overall operating profit in the fourth quarter of 2016, up from 24% in the same period three years earlier. Samsung’s shares have gained about 30% over the last six months, and in recent weeks have set records. Other memory-chip rivals, such as SK Hynix Inc., have recently reported earnings surges, while firms making semiconductor-manufacturing gear, such as Applied Materials Inc. and Lam Research Corp., have seen their shares skyrocket.

Semiconductors are in nearly every gadget and home appliance. There were 3.8 billion connected “things” world-wide in 2014, from televisions to baby monitors to thermostats, according to Gartner Inc., which projects that number will rise to 8.4 billion this year and 20.4 billion by 2020. Analysts estimate revenues from chips will double, if not triple, in the next decade.

“This is just the start,” said Avril Wu, research director at DRAMeXchange.

The annual revenue of the chip business has almost doubled to $352 billion a year since 2003, according to IHS Markit — more than twice the output of the U.S. auto-manufacturing industry and more than what Americans spend at fast-food restaurants. A decade of consolidation, plus the steep price tag to design or make new chips, has tamped down new entrants and allowed a handful of established companies to vacuum up profits.

Intel is the world’s largest chip maker with 2016 revenue of $55 billion, according to IHS Markit, even in a year when it exited the smartphone and tablet markets after betting on the wrong wireless technology and racking up losses. The next largest players in chips are Samsung, with $40.3 billion in revenue last year, and Qualcomm at $15.4 billion. Outsourced manufacturing firms, such as Taiwan Semiconductor Manufacturing Co., aren’t included in IHS’s overall semiconductor data.

The industry is dominated by three major chip markets that represent more than half its revenue.

Logic chips give devices their brains and computing power, retailing at roughly $75 in a computer or $4,000 or more for a data-server component used by Amazon.com Inc. or Facebook Inc. The other two are types of memory chips: NAND semiconductors determine how much data or content — music or photos, for instance — can be stored on phones, laptops or tablets. They cost about $25 for 32 gigabytes of storage. And DRAM semiconductors determine devices’ multitasking speed; a standard chip costs about $24.

At the center of the battle for procuring these critical components stands Samsung, the world’s largest smartphone maker and the biggest player in memory chips with a growing presence in logic semiconductors. Despite losing some $5 billion in last year’s Galaxy Note 7 recall, Samsung expects to post a 48% increase in first-quarter operating profit from the same period a year earlier, driven by sales of memory chips, when it reports earnings Thursday morning in Asia.

E.S. Jung, a Samsung Electronics executive vice president, who oversees its semiconductor research and development center, pointed to a new storage chip that took 15 years to develop — and which has helped fatten the firm’s bottom line. “Most of the competitors gave up,” Mr. Jung said. “But we never stopped research.”

Analysts expect memory-chip price increases to ease later this year as more manufacturers can produce the newer, high-end semiconductors that gadget makers desire. Samsung profited because it could mass produce these newer chips, though as rivals catch up, the available supply will multiply. That will cause prices to level off.

It is rare for new products to be delayed due to a shortage of chips, as companies secure inventories about six months ahead. But companies may have to compromise by using chips that take up more space in a device or use more battery power. Device makers and tech firms sometimes aggressively buy chips to build inventory, to avoid paying higher prices when supply is low, said Mehdi Hosseini, senior analyst in technology hardware at investment firm Susquehanna Financial Group.

Consumers can end up paying more for some devices because of rising chip prices. Apple Inc.’s next iPhone is expected to cost $100 to $200 more per device to make than last year’s iPhone 7, with memory chips accounting for $50 to $60 of that increase, according to Mr. Hosseini.

Samsung’s memory-chip costs rose about $10 for its newest flagship device, the Galaxy S8, versus the prior-year model, according to IHS Markit. The increase in memory-chip costs are lower for Samsung, in part, because Apple is expected to use a faster multitasking chip for the iPhone 8 that is similar to what last year’s Galaxy S7 and this year’s S8 have featured.

The new iPhone will cost around $1,000, according to analysts, while the standard Galaxy S8 retails at around $750.

–Ted Greenwald contributed to this article.

Write to Timothy W. Martin at timothy.martin@wsj.com and Eun-Young Jeong at Eun-Young.Jeong@wsj.com