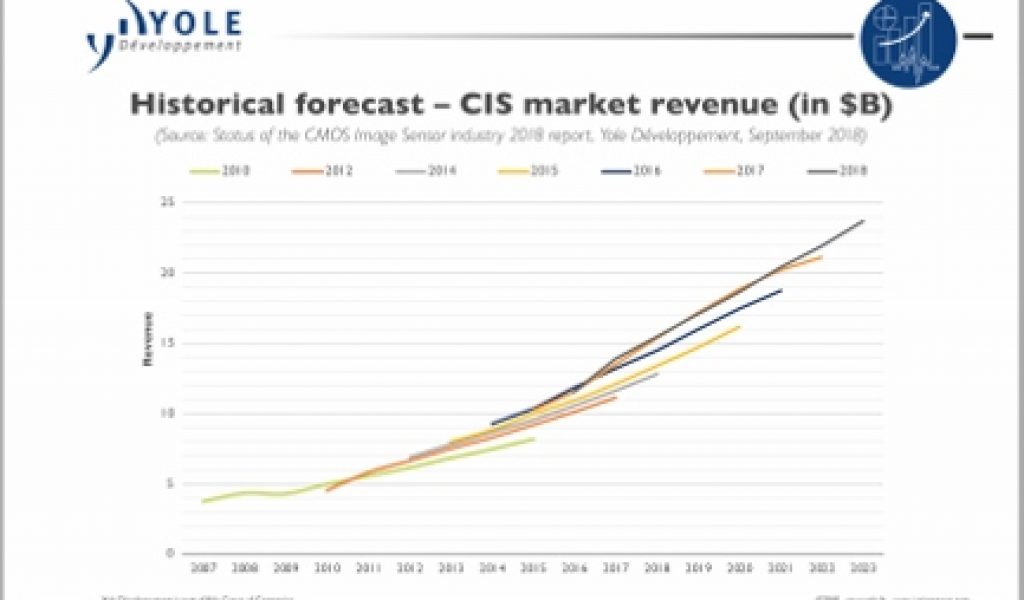 2017 saw aggregated CIS industry revenue of US$13.9 billion. And 5 years later, the consulting company Yole announces more than US$ 23 billion. The YoY growth hit a peak at 20% due to the exceptional increase in image sensor value, across almost all markets, but primarily in the mobile sector. “CIS keeps its momentum”, confirms Pierre Cambou from Yole.

Revenue is dominated by mobile, consumer, and computing, which represent 85% of total 2017 CIS revenue. Mobile alone represents 69%. Security is the second-largest segment, behind automotive.

The CIS ecosystem is currently dominated by the three Asian heavyweights: Sony, Samsung, and Omnivision. Europe made a noticeable comeback. Meanwhile, the US maintains a presence in the high-end sector.
The market has benefited from the operational recovery of leading CIS player Sony, which captured 42% market share. “…Apple iPhone has had a tremendous effect on the semiconductor industry, and on imaging in particular. It offered an opportunity for its main supplier, Sony, to reach new highs in the CIS process, building on its early advances in high-end digital photography…”, explains Pierre Cambou in its article: Image sensors have hugely benefited from Apple’s avant-garde strategy posted on i-micronews.com.
The CIS industry is able to grow at the speed of the global semiconductor industry, which also had a record year, mainly due to DRAM revenue growth. CIS have become a key segment of the broader semiconductor industry, featuring in the strategy of most key players, and particularly the newly-crowned industry leader Samsung. Mobile, security and automotive markets are all in the middle of booming expansion, mostly benefiting ON Semiconductor and Omnivision.

These markets are boosting most players that are able to keep up with technology and capacity development through capital expenditure. The opportunities are all across the board, with new players able to climb the rankings, such as STMicroelectronics and Smartsense. Technology advancement and the switch from imaging to sensing is fostering innovation at multiple levels: pixel, chip, wafer, all the way to the system.

CIS sensors are also at the forefront of 3D semiconductor approaches. They are a main driver in the development of artificial intelligence. Yole’s analysts foresee new techniques and new applications all ready to keep up the market growth momentum… A detailed description of this report is available on i-micronews.com, imaging reports section.