Cobots and Mobile Robots Stand Out at Automate 2017 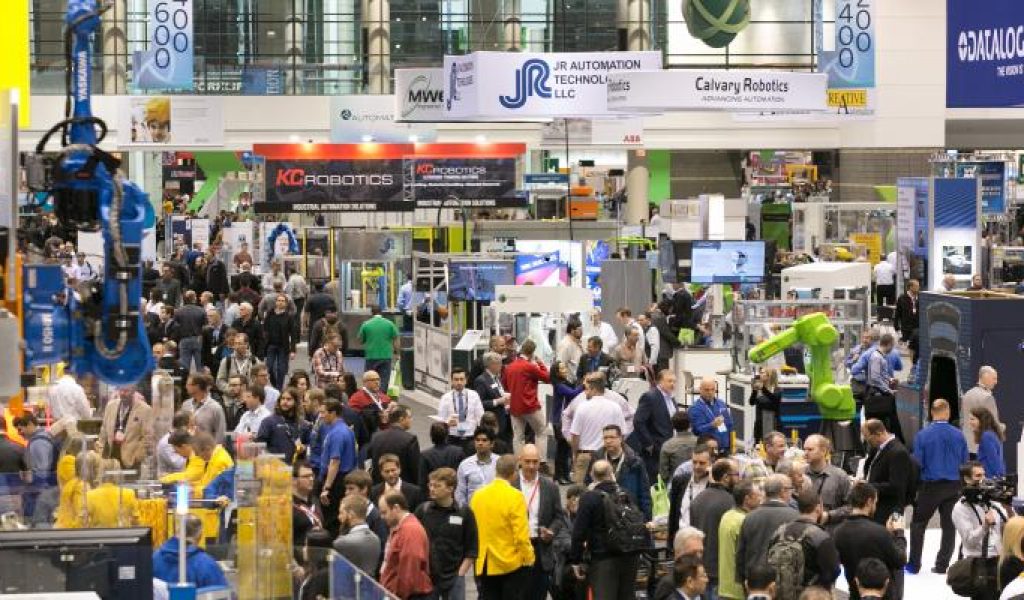 Automate 2017 was filled with just what the name might imply—automation, robotics, advanced systems, and technology experts. While many types of technology were on display at the show, a few trends emerged, and some, in time, might combine to create a new way we might think of manufacturing.

One issue that was not evident at the show: robots replacing jobs. Though workers could be displaced, jobs are actually on the rise. In fact, jobs in this industry are growing so much, the bigger concern is that there aren’t enough skilled people to fill them.

“Welding robotic arms” represent one solution toward keeping manufacturing in the U.S. as well as filling the job gap. Mino Automation, which provides welding robots, said the technology is in its software. Many companies at the show were touting user-friendly, quick setup, no (or simple) programming, and plug-and-play buzzwords.

However, Mino says it is possible to be up and running with its welding bot in 10 minutes. Also, to improve production, a table rotates, letting workers load and unload the next parts while the robot starts welding on the opposite side of the table.

Yasakawa Motoman offers welding robots and a setup that provides two bays protected by light curtains. The setup allows a continuous workflow similar to that of Mino. Zane Michael, director of thermal business management, talked about the skills gap concerns. He says that welding robots will help, but they will never replace the knowledge of a human. There are welding applications that don’t work well with the current technology, such as working in shipyards, and construction. One thing seemed clear, if you understand welding and robotics, you are in demand.

Robotic arms, welding or not, were a visible trend at the show. TM Robotics, collaborating with Toshiba Machine, launched the TVM series at Automate. “This is the first time Toshiba has launched a product in the U.S.,” said Nigel Smith, president of TM. “This is a big deal, and shows how other countries are seeing the value in the U.S. market.”

Robotic arms from Asia to Europe are using servomotors. One company mentioned it looks like the U.S. is stuck on continuous motors. When asked why, he mentioned that you do what you are familiar with. With the trend in wanting more control, the US will need to change. Some designers just don’t want to program. This will change in another generation, but until then, this difference might give our foreign competitors a leg up.

This cobot is a normal robotic arm with a conductive padded skin. The covering can be used on other robots to make it a cobot.

Many of these servomotors were working inside collaborative robots, otherwise known as cobots. The push for user-friendly operation includes the ability to work with people. Multiple comments from robotic companies expressed that robots can help, but the best processor is the human brain. Cobots allow for a blend of both.

Cobots have been around long enough to have a word coined for them. But reach has limited cobots, so  the new trend is to add more axes. For example, at the show, cobots slid along on a gantry system. This demonstrates some of the cobot-related trends that I’ve touched on in previous articles:

• Increased use of cobots

For a cobot to work around people, functional safety allows the robot to slow down rather than completely stop. This saves on enclosure cost while increasing productivity. Accessories like vision sensing monitor the surrounding area to keep workers safe.

Vision technology provides functional safety in a variety of applications. This accessory not only let cobots move more freely, but also improves pick-and-place abilities. For instance, ordering from the internet has become a huge industry, so dynamic distribution centers are important. Machine vision provides the ability to detect geometries to pick and place from bins to fill orders on demand.

Another accessory trend concerned grippers for the robot arms. Various companies are designing grippers for companies such as Universal Robots and others.

Collaborative robots are bringing companies together. This setup uses Festo’s controller to control a Robotiq gripper on a Universal Robots arm with SICK proximity sensors.

Some grippers offered a sensitive “touch” feature. Optoforce is a sensor that can be used with a gripper. It uses light sensors to determine if the gripper has contacted anything. While cobots can be programmed to stop at various forces, it generally takes at least a few newtons to stop them. Thus, it could knock over a box without notice.

Optoforce sensors give a cobot an increased sense of touch within a newton. This ability to “feel” such small loads means the gripper can sense the edge of a box, which could ultimately improve pick-and-place applications, among others.

Many types of grippers were on display at the show. Every robot seemed to have a different design, but the double gripper was popular. This let a single arm unload and load a machine without having to go back and forth.

In addition, Robotiq’s adaptive two-finger gripper could be found on multiple robot arms. In fact, Stanley Robotics saw the value in a Kinova arm and Robotiq gripper combination, designing a coupling that enables the two to be used together without any exterior wire. This allows for infinite rotation at the wrist. Such an innovation might become a bigger trend in the future as more companies find creative ways to bond advanced grippers to robot arms.

Bringing all of the technology together was the next logical step: Cobots mounted on self-driving robots called mobile robots. None of the manufacturers said this was currently taking off, but there is a strong feeling that companies will look to exploit this technology in the future.

MiR’s robot uses two LiDAR sensors on opposing corners with 270 degrees to scan its entire area of operation. You also must have a platform that can fit through doors, ground clearance to travel over a door threshold, and the power to go up inclines. In addition, the speed and weight need to match the robot’s braking power. If the robot travels too fast with an increased load, it might not be able to stop if a person runs around a corner.

“You must remember we are trying to collaborate with robots,” says MiR CTO Niels Jul. “If we made a robot too big, it might look scary or intimidating. Also, while the top speed of this robot is about 1.5 m/s, it will generally travel at 0.8 m/s. This speed is just a little slower than a person, so if anyone is scared of robots, it makes it easy to run away.” This was a funny comment, but also had some truth to it. Workers have to be comfortable working around these types of robots.

“Roomba really set the stage for us,” says Jul. “People are comfortable having a robot run around them without them really caring. Now as these robots are integrated into our homes and work more, we are more comfortable with them.”

I asked, “If the future is cobots on mobile robots, how do they accurately pick and place?”

“There are vision systems, but do you see the ‘V’ feature bent into the sheet metal of this stand?,” Jul said as he pointed to a bend in the skirt toward the end of a conveyor belt where the mobile robot was picking up products.

“The LiDAR is able to align itself within one centimeter of accuracy,” said Jul. “This is great for a simple conveyor application to load and unload parts. If you need a higher degree of accuracy, say for a cobot, you have mechanical fasteners attached to the machine.”

“This fastener snaps into place and gives you 1 mm of accuracy. In addition, if the cobot is moving a load, it could shake the platform. This could make picking and placing difficult. Using the mechanical fastener allows the platform to be held still while loading and unloading,” concluded Jul. For greater accuracy, machine vision could help. Many trends seemed to hinge on LiDAR or machine vision.

For picking machines, laser or camera vision systems give a geometry for the arm to orient itself to the part. I noticed a lot of laser vision, not cameras, used to accomplish this operation. Also, despite all of the new hand-like grippers, I still saw a lot of vacuum grabbers. Many of the new vision systems allow a vacuum to be used because it is able to target a label, or something a vacuum would be able to seal to.

Vision, cobots, and mobile technology were the trends I noticed at the show, but there was much more. Automate 2017 was a success. The technology and access to it was impressive. Now we need to inspire others to get the skills so we can stay competitive as we advance our systems. It isn’t technology that is holding us back, it is our lack of knowledge about this technology. I’m hoping there will soon be a trend to fill these skills gaps.