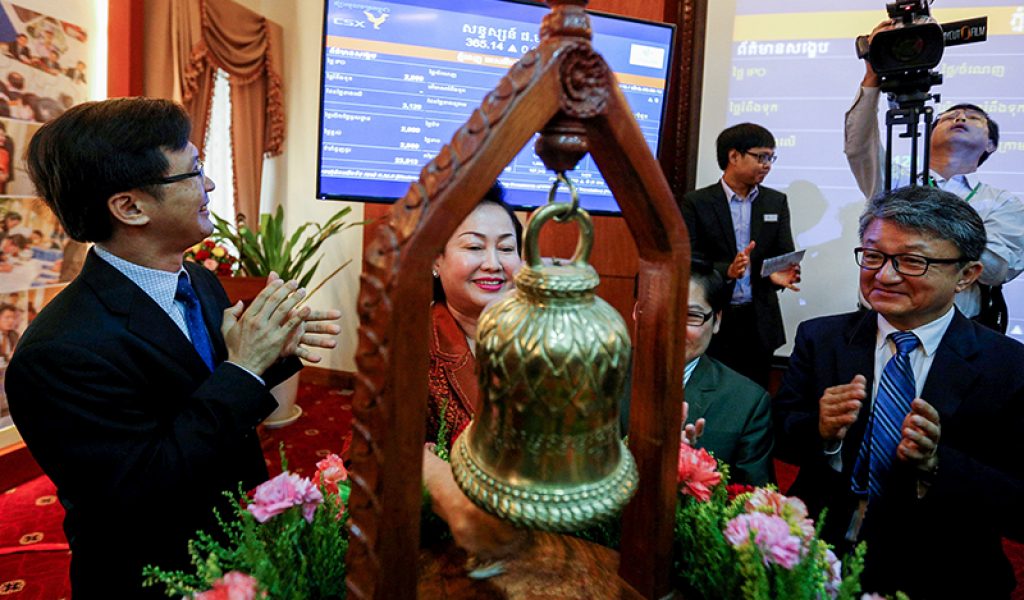 “In 2010, 88 percent of manufacturing consisted of garment, textile and footwear, with 8 percent of electronic components and assembly,” Chea Serey, director-general of the National Bank of Cambodia, said at the Cambodia International Business Summit in Phnom Penh on Wednesday.

By 2016, garments comprised just 73 percent, while other products, including electronics, made up the rest, Ms. Serey said.

“The trend of garments as a component of total manufacturing has been declining steadily,” she added.

The growth in electronics manufacturing is the result of Japanese investors setting up production operations in Cambodia in recent years, according to Sok Chenda Sophea, secretary-general of the government’s Council for the Development of Cambodia, which oversees foreign investment in the country.

“Those Japanese companies who are in Thailand, they are not moving the whole [operation]. They are still in Thailand, but some production will be done in the neighboring countries of Thailand, [Burma], Laos, hopefully in Cambodia,” he said.

A similar trend can also be seen among companies producing primarily in China, but looking to diversify their manufacturing base, he said.

“For China+1, they can do all things in China, but they don’t want to put all the things in the same basket and they are all looking first at Asean and in Cambodia,” he said.

Mr. Chenda Sophea added attracting such investors—who produce goods in Thailand and China, but are looking to diversify their manufacturing locations, partly for cheaper labor—was a top priority of Cambodia’s Industrial Development Policy.

In addition to Japanese firms investing in the Phnom Penh SEZ, a South Korean company has bought 100 hectares of land and plans to develop an automotive SEZ, another example of foreign investors bringing higher value manufacturing to Cambodia, Mr. Chenda Sophea said.

Within the planned SEZ, the company would produce car parts and bring in other investors to produce spare parts, he said.

John McGinley, managing partner of investment and advisory firm Mekong Strategic Partners, said increased Japanese investment in the manufacture of electronics, including circuit boards and smartphone screens, would have knock-on effects for the Cambodian workforce.

“Typically, what we have witnessed in Cambodia is that Japanese manufacturing is much more complex, and requires a more highly skilled labor force than the garment sector,” Mr. McGinley said in an email.

“This has resulted in much higher investment flows from Japanese firms being channeled into human resource skills training and development, than from the garment sector,” he added, noting that it also meant higher wages for workers.

In 2015, the Asian Development Bank reported that investments in SEZs had created 68,000 jobs, with better pay and better prospects for workers.

“The benefits to the host country of establishing SEZs lie, overwhelmingly, in employment creation at attractive wages,” it said. Japanese firms moving some manufacturing operations to Cambodia showed that they have entered the market with a long-term perspective, Mr. McGinley said.

“We have received feedback from Japanese firms as it relates to their experience, and perceptions of the operating environment in Cambodia has been overwhelming positive,” he said. “We expect this positive trend to continue.”

© 2017, The Cambodia Daily. All rights reserved.No part of this article may be reproduced in print, electronically, broadcast, rewritten or redistributed without written permission.