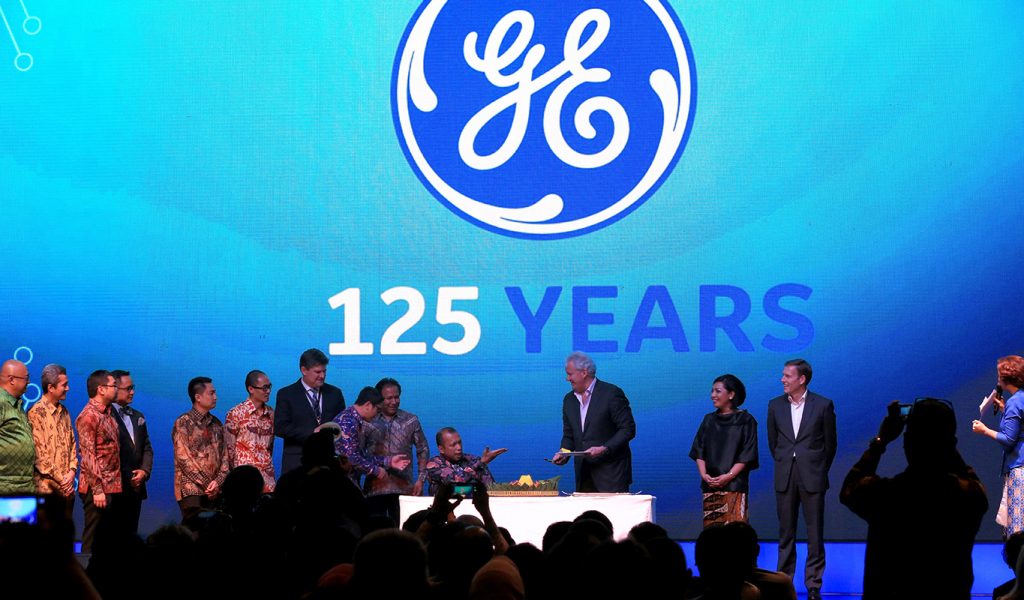 In line with a white paper called “The Future of Work in Indonesia” released by GE Indonesia in conjunction with the forum, the symposium was part of the company’s digital industrial transformation, merging its expertise in heavy machinery with its big data analytics capabilities.

The big data capabilities will enable GE and its customers to connect with and get real-time insights into their assets, as well as optimizing their asset performance and efficiency. GE called the technology the “industrial internet”.

The industrial internet merges big data and cloud-based analytics with industrial machinery, resulting in greater efficiency and increased operating performance. The principle is simple: industrial assets like power generation turbines, jet engines and medical devices are equipped with electronic sensors, which collect enormous amounts of data on the functioning of the machines as well as on the external environment.

The technology, involving sophisticated physics and analytics, can transform the manufacturing process, resulting in fewer productivity slumps and real-time problem solving. Increasingly, industrial companies will be driven by digital platforms to make them safer and more productive.

The forum was attended by more than 600 people consisting of GE Indonesia employees, government officials, delegates from the business world and academia. Among the prominent people who attended the event were former Indonesian president B.J. Habibie, who is also an engineer, and Finance Minister Sri Mulyani Indrawati.

According to GE’s chief executive officer (CEO), Jeff Immelt, the disruption brought by the industrial internet should not be feared; instead, businesspeople should capitalize on it to improve the productivity and efficiency of their industrial operations.

Previously, you might think that a world where machines could talk to one another and actually interact with humans existed only in films like Star Trek. In fact, there is no need to wait any more, it already exists right in front of us. The technology involves the rapid processing of information through big data, particularly for detecting a problem, identifying its root cause and making real-time decisions to overcome it.

For instance, the technology is capable of sending early warnings of the failure of a hospital machine a minimum of two weeks in advance. If not detected early, hospital machine failures could disrupt operations, leading to the inconvenience of patients being transferred from one hospital to another.

“The technology could also help avoid outages among wind turbines by predicting the fluctuation of wind flow velocity a few hours ahead,” Jammu explained, saying that although the technology was produced by GE, it could also be applied to non-GE engines.

The technology is also applicable for at least five different sectors: power, healthcare, transportation, oil and gas as well as aviation. Representatives from each industry were present during the forum to view presentations on how the technology could contribute to their respective fields.

“Furthermore, brainware [artificial intelligence] developers have to be aware that system security is very important to prevent information manipulation,” he added.

GE Oil and Gas regional IT leader for Asia Pacific David Parkinson said that currently the company focused on training its human resources.

“We have a problem with an aging workforce, so now the question for us is how to avoid knowledge from leaving the business,” he said.

To support gender equality, GE is specifically focusing on female engineers. In fact, according to Immelt, the company aims at employing 20,000 female engineers from computer science as well as other study fields by 2020.

In order to discuss this issue, the forum also featured a Women’s Network Luncheon, a gathering of female engineers across Indonesia.

“We hope that these female engineers can continue to grow, helping us to get the best talent,” Immelt said during the luncheon.

According to the minister, the male-female gender composition in Indonesia is evenly distributed, with women constituting 50.6 percent of the population and men 49.4 percent. In terms of academic achievements, they are also both relatively equal. Once women enter the workforce, however, soon they find their careers being curtailed by the gender-biased society, which still prioritizes men entering the workforce.

“Women’s participation in the formal workforce has dropped; their salaries are 19 percent lower than men’s. In the engineering field their participation is even lower,” Sri Mulyani said during the luncheon.

She attributed this low female participation in the engineering field to society’s perception that women were not fit to study and work in engineering, which is widely considered a “tough subject”. Furthermore, society generally treats women differently as they are expected to take care of the family, a burden that does not affect men in general.

“In order to overcome this [gender inequality], it’s not enough for us to talk at the [government] policy level, but we also have to look at how organizations also have to support women who are climbing their careers in the workforce,” she said.

“To produce more female leaders, companies have to build pipelines where CEOs are grooming outstanding female workers to be future leaders right from the start of their careers,” she added.

As part of its effort to support the digital transformation of Indonesia’s industrial scene, GE Indonesia CEO Handry Satriago said that in 2015, the company introduced a new business called GE Digital.

Immelt added that the industrial internet field offered vast business cooperation opportunities for many different parties, revealing that last year the company invested US$6 billion to develop the technology.

Speaking about cooperation with relevant stakeholders, the company has just marked the first step of its attempt to bring the industrial internet to Indonesia by signing a number of memoranda of understanding (MoUs) with several institutions, including the Communications and Information Ministry, local startup Dattabot and energy company PT Medco Power Indonesia.

“In our company, people often say ‘Why not us?’ as a motto. Right now, we need partners, people who are eager to experiment with us. So now the question instead becomes: ‘Why not you?’” Immelt said.

This article brought to you by: