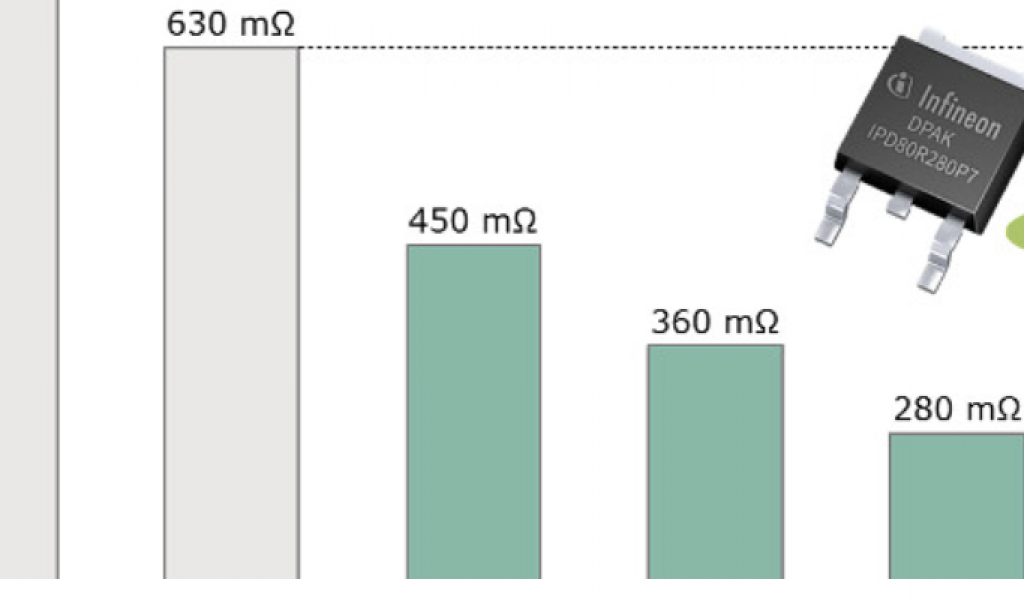 HV MOSFETs play a fundamental role in flyback topology, which means that finding the right MOSFET is critical to meeting market requirements. Here’s guidance on doing that.

Smaller, smarter and more powerful are market trends for low-power switched-mode power supply (SMPS) applications. Smaller requires the SMPS to have a more compact form factor – and, thus higher power density. Smarter requires intelligent system-to-system/system-to-human communication to ensure the systems are environment- and human-friendly. More powerful requires the SMPS to output more power to supply energy to many different devices to save cost for consumers.

Benefits due to these market trends are obvious. A smaller size leads to space saving and makes systems more portable. Energy saving due to higher efficiency and smarter design helps consumers save money on electricity bills, as well as supporting a ‘greener’ world – as less power supplies are needed at home thus there is less pollution in production and less waste when it comes to end-of-life disposal.

Adapters and chargers, LED lighting, audio SMPS, auxiliary power and industrial power are typical low-power SMPS markets where flyback topology is the most common topology. High-voltage (HV) MOSFETs play a fundamental role in this topology, which means that finding the right MOSFET is critical to meeting the challenges posed by market requirements.

For switching losses, Qg and Eoss are important MOSFET device parameters. Qg is closely linked with the effort to drive MOSFETs and smaller values leads to lower driving losses. Eoss is the energy consumed by the MOSFET when it switches on. RDS(on) is an important device parameter and determines conduction losses, which plays a critical role at full-load condition.

MOSFET ESD ruggedness is one area that is gaining more and more attention when it comes to MOSFET selection, as it helps to improve production yield and reduce field returns. Robustness, ease of driving and design-in also have to be considered by engineers who are under pressure to deliver fast time-to-market. VGS(th) and its deviation needs to be considered here: lower VGS(th) makes MOSFETs easier to drive while a smaller VGS(th) deviation gives designers more freedom in SMPS design.

Table 1 gives an overview of key parameters for TO-220 FullPAK products with a maximum RDS(on)rating of between 400mΩ and 450mΩ. CoolMOS P7 has been fully optimised to deliver best-in-class performance. Compared to the nearest competitors, Qg and Ciss for CoolMOS P7 is improved by 17% and 10%, respectively. In the case of Eoss and Ciss, a dramatic improvement of 43% to 45% has been observed. These optimisations significantly improve CoolMOS P7 efficiency and thermal performance as demonstrated in an 80W dual stage flyback LED driver application (see Figure 1).

There are typically two ways to realise the high-power densities required in today’s market. One way is to use a HV MOSFET at high switching frequencies. This delivers better efficiency, while the highfrequency switching enables the system to use smaller magnetic components to reduce system size. CoolMOS P7 can address such designs with significantly lower switching losses.

The other method is to use a HV MOSFET with a smaller footprint. CoolMOS P7 also supports this approach by offering DPAK products with lower RDS(on) ratings. As indicated by Figure 2, CoolMOS P7 offers lower DPAK RDS(on) rating of 450mΩ, 360mΩ and 280mΩ with 280mΩ as best-in-class, which is 56% lower as than that of the nearest competitors. Better DPAK products help customers save space to increase power density and reduce production costs by utilizing fully automatic assembly processes (when changing from through hole to SMD packages).

Figure 3: (a) Schematic of CoolMOS P7, (b) a zoom in view of the area between gate and source as highlighted by in (a).

One of the most important features for the CoolMOS P7 product family is its integrated Zener Diode, which reduces ESD related failures to improve quality and reliability. The Zener Diode is integrated into CoolMOS P7 between the gate and the source (see Figure 3 (a)), where its function is to provide ESD protection. As shown in Figure 3 (b), during an ESD event the voltage between gate and source (VGS) is clamped by the Zener Diode.

Using the CDM model, ESD ruggedness is Class C3. This ESD protection feature helps reduce ESD related failures during assembly, leading to lower production costs. It also helps reduce field returns by avoiding gate oxide overstress. This is an issue that leads to reduced lifetime of MOSFET; making it possible for a MOSFET that does not fail during assembly to fail in the field.

CoolMOS P7 combines best-in-class efficiency with state-of-the-art ease-of-use. This product family is ideal for flyback applications with outputs up to 250W.

Infineon supports the design-in of CoolMOS P7 with a variety of application notes and reference designs, including a 45W adapter demonstration board.