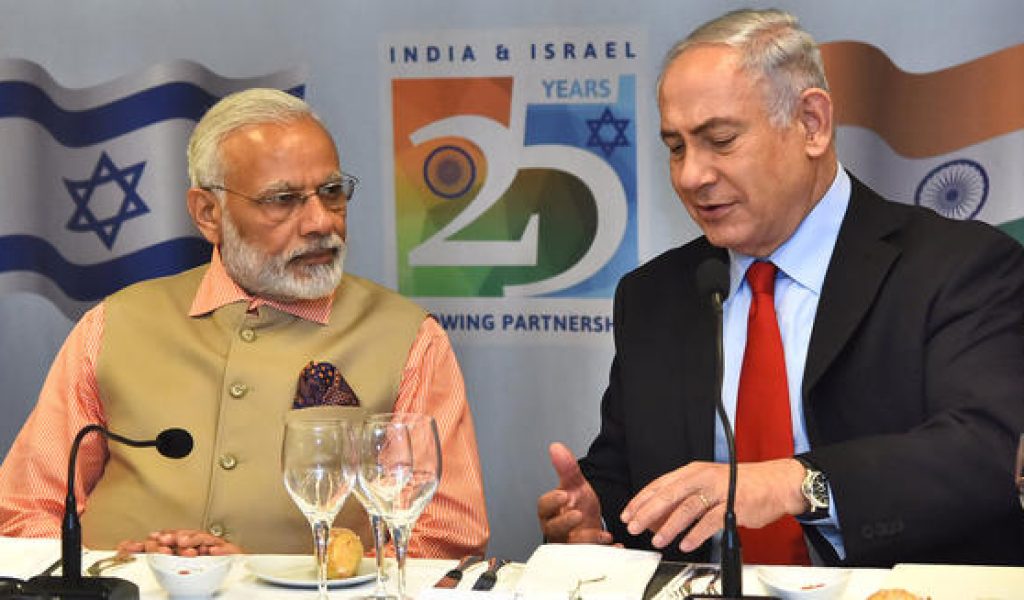 NEW DELHI — Indian and Israeli companies have signed a dozen key agreements valued  at more than $4.3 billion for collaboration in a range of sectors including aerospace, defense, water and rail infrastructure.

The deals were struck during Prime Minister Narendra Modi’s three-day visit to Israel which concluded on Thursday.

As part of the historic visit — Modi is the first Indian prime minister to travel to Israel since his country’s independence from British rule in 1947– CEOs of leading companies from the two countries held their first-ever forum in Israeli capital Tel Aviv and agreed that their current bilateral trade amounting to just over $4 billion had the potential to reach $20 billion in the next five years.

“It is very exhilarating for me to share that during this historic visit of our Prime Minister to Israel, 12 MoUs are signed between Indian and Israeli companies,” said Pankaj Patel, president of the Federation of Indian Chambers of Commerce and Industry (FICCI) and chairman of Zydus-Cadila Healthcare, who led a 16-member delegation of Indian CEOs and co-chaired the meeting.

Among the agreements was one worth $2 billion between India’s Texmaco Rail & Engineering, part of the Adventz Group, and Israel’s Leshman-Lesico Group for cooperation in light rail projects in Tel Aviv and Jerusalem.

Another major pact was inked between Kalyani Strategic Systems, a subsidiary of Pune-based Bharat Forge, and Israel Aerospace Industries (IAI) to address a range of opportunities across air defense systems, radar, anti-ship missiles, and command and control systems for the Indian military, with a total deal value of $1.55 billion over a period of seven to 10 years, a FICCI statement said.

IAI also signed two other memoranda of understanding with Indian companies, including a five-year $100 million pact with Wipro Enterprises for the manufacture of aerospace composite parts in India that will meet the requirements of global aircraft original equipment manufacturers and tier- 1 suppliers. Another deal, whose value was not disclosed, was struck with Dynamatic Technologies and Elcom Systems for making medium altitude long endurance unmanned aerial vehicles in India, with a technology transfer from IAI and the creation of a futuristic UAV enterprise in the South Asian nation.

The FICCI statement saidthe12 strategic business MoUs signed during Modi’s visit were worth over $4.3 billion. It added that the focus sectors identified at the CEOs’ forum were agriculture; irrigation and water treatment; urban infrastructure and transport, including high speed railways and metro trains; pharmaceuticals and life-sciences; digital technologies; information technology and IT-enabled services; startups and innovation; and defense and homeland security.

India’s Alpha Design Technologies and Israel’s Elbit Security Systems joined hands for the development and manufacture of thermal imager-based sights and fire control systems; mini and medium-sized UAVs, and long-range reconnaissance and observation systems, with a deal value of $500 million over 10 years.

Mahindra Group, whose flagship company is automaker Mahindra & Mahindra, signed an MoU with Israel’s Shachaf Engineering for the design, development and manufacture of strategic electronics; and another with Cyclone, a subsidiary of Israel’s Elbit Group, for the production of structures for aircraft. The deal values were not disclosed.

Cadila Healthcare and Israel’s Phibro Animal Health Corp. inked a pact for setting up a poultry vaccine project in India on a technology transfer basis in a deal worth $154.7 million.

India’s Sun Group signed a $50 million deal with Ecoppia Scientific for manufacturing waterless robotic solar panel cleaning units for supply in India and abroad, and another pact — whose value was not revealed — with Water-Gen, an Israeli company known for its cutting edge technology that can produce clean drinking water from the air.

Shraga Brosh, president of the Manufacturers’ Association of Israel and the CEOs’ forum co-chair, said they had identified “great business opportunities” for Israeli companies in India in sectors such as transport infrastructure, including roads, railways, civil aviation and traffic management systems; smart cities; renewable energies; water and environment; automotive; food; and naval, aerospace, and defense.

“In all these sectors, identified as a priority by the Indian government, we count on leading companies at global level that will be able to contribute to the economic development of India,” he added.

Invest India, the national investment promotion and facilitation agency, said during the CEOs meeting that it had established a dedicated team to promote Israeli investments into India. It will act as a single window agency providing comprehensive services for all ventures between the two countries.