Industrie 4.0 and the future of mobility at the Viscom Technology Forum 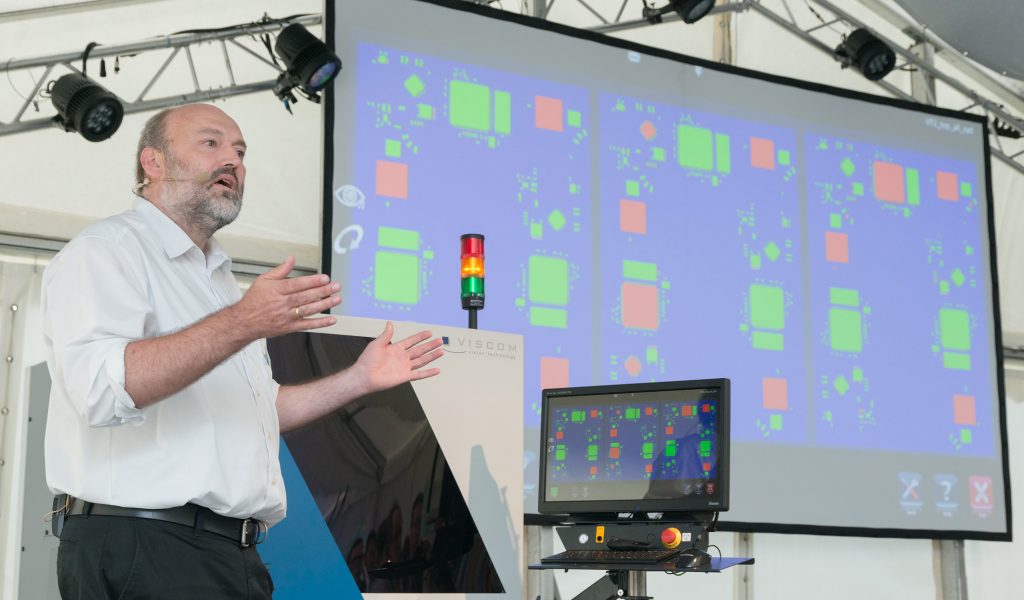 Hanover, July 2016 – Again this year, Viscom extended invitations to the Technology Forum in Hanover. What was new? Instead of taking place in March as before, the event took place on the 8th and 9th of June. The participants could also choose from a wider selection this year – numerous informative technical presentations and workshops, as well as new elements such as tutorials and “Meet the Experts” for specialists. Another first for this event was, it was hosted in the facilities of the new Viscom building on Carl-Buderus-Straße 6, constructed only a few months ago. In the keynote speech, automobile designer Murat Günak illuminated the future of mobility. The highlight of the evening get-together in the specially erected festival tent was comedian Benjamin Tomkins.

Those who have already used a Viscom system for some time come to the Technology Forum with different expectations than a potential buyer. Building on the positive experiences of the past, this was a reason for Viscom to further improve and expand the concept of the event so it was more closely attuned to the needs of the different guests. This time, cost-free workshops and exclusive conversations with specialists (Meet the Experts) were directed to Viscom customers, while special tutorials with basic content were addressed to other interested persons. The mixture of application, research, theory and a noteworthy look over the horizon proved itself yet again. “We are very pleased with the resonance again this year and are already thinking ahead to Technology Forum 2017,” as Volker Pape, Viscom Executive Board, summed up the event.

A detailed program gave participants information over the entire range of topics and enabled them to make preliminary choices on their registration forms. After the first nine information offerings on Wednesday morning, everyone gathered for the keynote speech from Murat Günak. The renowned automobile designer, of Turkish heritage, has held leading functions at Peugeot, Daimler, Volkswagen and other companies and in the new conference room at Viscom, conveyed his view of trends like electrically powered vehicles and new mobility concepts. One aspect of this presentation was the decisive role the latest electronics play in these developments, and another was that ideas which today still sound like science fiction will become reality sooner than one could believe. This itself was apparent in a glance back in history. One example Günak pointed to was the span of about 60 years between the attempts at powered flight by the Wright brothers and the first moon landing. Back on the road, the designer clarified the deep connection between humans and automobiles for his audience. Sociologically, the automobile replaces the horse, which used to stand in the nearby stall. It also says a lot about the tastes and status of its owner. With this as a backdrop, Günak steered his listeners’ attention to the current challenges in urban areas, where it is not always easy to take delight in individual mobility. Multitrack cycle lanes, significantly leaner, autonomous means of locomotion, and other exciting approaches can spur new ideas here.

Ultimately, a meeting of the industrial sector like the Technology Forum is also a platform for informal discussion. The exchange of experience around the topic of SMT (surface mount technology) and other areas of electronics manufacturing were again very lively. The evening get-together in the courtyard of the recently completed Viscom building gave ample opportunity for such discussion, even when one or the other of the groups – at least for a while – turned to the magic and card tricks performed by the artist Jens Ohle or the plentiful grill specialities. The large festival tent, erected especially for this enjoyable close to the first day of the event, was an excellent match to the summer weather. The band “Ellingtones”, who seemingly could transform every hit into a novel swinging jazz number, provided musical entertainment. Later, as Benjamin Tomkins appeared, the technical discussions had to quiet and whoever was still standing outside headed into the tent. From that point on, it was all about laughter. The comedian known as the “Puppet Whisperer” described his everyday life as a ventriloquist, drew several unprepared members of the audience into his show and ultimately landed right on target in verbal jousting with one of his several puppets. Together with a selection of photos, three short film clips of his appearance can now be seen on the Viscom website.

The keynote speech by Murat Günak opened a wide-ranging series of lectures. Markus Seidl, from DELTEC Automotive GmbH & Co. KG, gave a report from his experience in serial process stability with SPI (solder paste inspection), AOI (automatic optical inspection) and X-ray inspection. According to his report, a stable serial process depends on numerous different influencing factors, such as the technical equipment, employee training or preventive maintenance. The lecture continued in more detail, relating how DELTEC only uses inspection systems by Viscom and combines, for instance, the AOI and SPI results, for process improvement. The consistent software platform throughout all inspection gates has proven itself a strong advantage in the process.

Dr. Artem Ivanov, from the Landshut University of Applied Sciences, spoke about temperature behavior and current carrying capacity of ribbon bond connections in power electronics. This included how to correctly estimate the temperature of a ribbon in dependence on current strength and ribbon length, or current strength and temperatures in bond connections with several parallel ribbons. From the user’s perspective, according to this lecture, ribbon connections in high-current modules in power electronics or in low-ohm connection technology for lithium-ion batteries are extremely relevant. Helge Schimanski, from the Fraunhofer Institute for Silicon Technology (ISIT), then described the reliability of solder joints on ceramic SMD (surface-mount device) components in dependence on pad layout and solder volume. About 380 processed printed circuit boards and about 47,000 soldered components, along with several solder pastes, were involved in this investigation. Room temperature was also an important factor in the ISIT results. Thus, the humidity and temperature in the assembly machine and paste printer were recorded. Another lecture focused on the influence of voids on the reliability of LED solder joints. Together with Andreas Reinhardt, SEHO Systems GmbH, speaker Ping Xu, from Friedrich Alexander University, gave an interesting view of this topic. According to this report, because of solder-free technology there are more voids than formerly. In this investigation, computed tomography was used for 3D characterization and load-cycle tests were conducted. The result is an extremely comprehensive documentation of crack formation. Additional tests and simulations are planned for the future.

Peter Sander, of Airbus Operations GmbH, could give a close introduction to one very exciting innovation: 3D printing in civil aviation construction. He provided many examples to make clear, this technology has long since established its place in practice. Parts which still today are usually milled from a block of material can be built up layer by layer from powdered metal. Whether titanium, stainless steel or plastics – instead of coming from a supplier, the components are created right where a company actually needs them. This saves energy, materials and costs. A connection to the lecture from Murat Günak was also elegantly drawn – 3D printing facilitates a refreshingly novel bionic design, such as in buildings.

The numerous workshops, tutorials and exclusive conversations with specialists aside, Viscom too was represented by several highly pertinent workshops: Peter Krippner, SP division manager, and Detlef Beer, group manager in Product Development, demonstrated the possibilities offered by 3D AOI in a live demonstration. Here, improvements in throughput and texture in particular came to the fore. Their colleague Henning Obloch, manager of Service, reported on the current Service offerings of the company while Volker Pape, Executive Board, outlined the buzzword Industrie 4.0 with practical reference to the electronics sector and especially, SMT manufacture. His personal view: From a marketing standpoint, the term makes complete sense. It directs attention to German industry all around the world. In the opinion of the Viscom founder, however, the technical developments behind the term, such as networked automation or intelligent fabrics, would exist even without the buzzword and the future is certain to bring even more changes. “We need human intellectual capacities to drive this movement onward,” states Pape. In this presentation, there was no shortage of examples of the realization of Industrie 4.0 from the hosts themselves. These include, for one, the communication of the SPI system with the paste printer and assembly machine as well as other inspection systems in the production line. Linking this kind of data accomplishes clear advantages in electronics manufacturing.

For those seeking information over topics such as 3D for AOI and X-ray (AXI/MXI) inspection, Viscom experts were available as conversation partners throughout most of the event. One topic that arose time and again was practical implementation of communication of individual inspection gates with each other and the Viscom Quality Uplink. Specialized questions about systems from Viscom that were already in use were answered by Viscom employees from Service and Applications Support. They provided the customers with information about, for instance, the current upgrade offers. General matters such as increasing productivity, quality and efficiency or optimizing costs and work processes were also a repeated theme. The topic of production monitoring via smartphone offered a glimpse into the future at Viscom. A corresponding Viscom app is currently being developed.

In the workshops, the participants could experience more about new software features for Viscom systems, solutions for 3D component, lead and solder joint inspection, efficient off-line programming as well as optimizing inspection times. MXI/AXI and wire bond inspection, too, came into the focus. For the “Meet the Experts” meetings, themes which from Viscom’s view had crystallized as especially relevant over the last few months were chosen: the inspection of over-long printed circuit boards, multi-line verification, the double monitor solution at the verification station (AAD Viewer), an overview of MES (Manufacturing Execution System), use of the flat panel detector and Release 2.2 for vVision users. Whoever was especially interested in the product range found exactly what they wanted in the new demo center, where experienced applications specialists presented nearly all the inspection solutions from Viscom. On Wednesday, for example, many of the guests listened in right up to the official conclusion at 4:30 p.m. – and then even later.

Caption 1: Reception of the participants

Caption 2: Arrival of the participants

Caption 4: The program offered a wide selection: Participants could choose between informative technical presentations, workshops and even new offerings such as tutorials and “Meet the Experts”

Caption 6: Participants at an event in the Viscom conference room

Caption 10: Pause in front of the new Viscom building

Caption 12: Start of the evening event in the courtyard

Caption 13: A swivel grill ensured there was a wide selection of meats for the event participants

Caption 14: Musical entertainment for the evening was provided by the Hanover band “Elligtones”

Caption 15: Throughout the entire event, Viscom employees were available for questions concerning service and applications

Caption 16: The show from Benjamin Tomkins offered the best entertainment of the evening

Caption 18: In his presentation, Markus Seidl of DELTEC Automotive GmbH & Co. KG explained how a stable serial process is achieved with SPI, AOI and X-ray

Caption 20: Helge Schimanski of the Fraunhofer Institute for Silicon Technology (ISIT) with his presentation, “Reliability of Solder Joints for Ceramic SMD Components in Dependence on Pad Layout and Solder Volume”

Viscom AG develops, manufactures and sells high-quality inspection systems. The portfolio encompasses the complete bandwidth of optical and X-ray inspections. In the area of assembly inspection for electronics manufacturing, the company is among the leading suppliers worldwide. Viscom systems can be configured specific to the customer and can be interlinked. The company headquarters and manufacturing location is in Hanover, Germany. With a wide network of branches, applications centers, service support points and representatives, Viscom is represented internationally. Founded in 1984, since 2006 Viscom has been listed on the Frankfurt Stock Exchange (ISIN: DE0007846867). For additional information: www.viscom.com