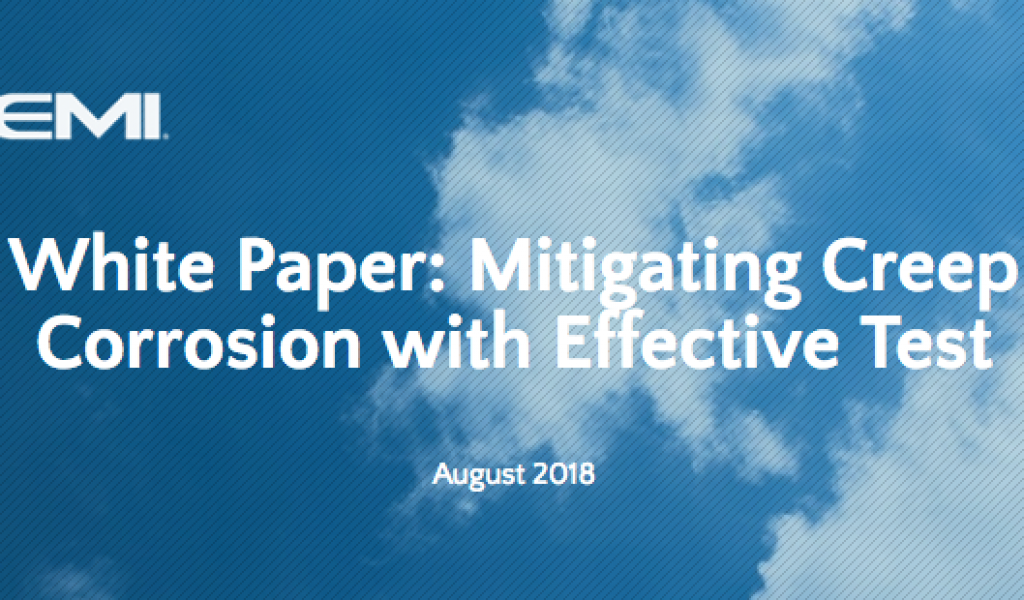 The International Electronics Manufacturing Initiative (iNEMI) has published a white paper, “A Cost-Effective & Convenient Approach to Creep Corrosion Testing ,” that details how the iNEMI Qualification Test Development for Creep Corrosion project created a qualification test to determine whether printed circuit board assemblies (PCBAs) are likely to develop creep corrosion.

The innovative flowers-of-sulfur (FoS) corrosion chamber developed by the project team is inexpensive and easy to maintain; and it allows the temperature, relative humidity, sulfur and chlorine content to be reasonably well controlled within the chamber. The test has been very successful in reproducing creep corrosion on printed circuit boards (PCBs) from lots that are known to have suffered creep corrosion in the field.

Creep corrosion is the corrosion of metallization and the migration of that corrosion across PCB surfaces. Problems arise when the corrosion migrates to such an extent that it bridges features on PCBs, thus causing electrical short circuits. Corrosion-related failures are an increasing reliability concern for two reasons: the elimination of lead in electronics (where lead-based surface finishes offered excellent corrosion resistance) and the growth of electronics manufacturing in Asia where environments are often humid and/or have high levels of sulfur-bearing pollution (which are triggers for creep corrosion). These concerns have created the need for a corrosion test to ensure product survival in the types of environments where there is a high risk of creep corrosion.

“iNEMI began working on the creep corrosion problem in 2009,” says iNEMI CEO Marc Benowitz. “Our initial efforts were very successful on improving our understanding of the factors affecting creep corrosion on PCBs and PCBAs, such as surface finishes, soldering fluxes, design features and the environment. More recently, with the need to identify an efficient and effective creep corrosion test, the team has successfully developed this FoS test chamber, which  also has the potential to be used as a general-purpose corrosion chamber for a range of studies. Now the industry has a very effective tool to leverage in our quest to reduce incidences of corrosion-related failures.”

The iNEMI white paper highlights some of the key findings from the project team’s extensive testing, describes the FoS test chamber developed by the team and discusses how the chamber is used. To download a copy of the paper, go to: https://www.inemi.org/creep-corrosion-white-paper-2018

iNEMI is planning a half-day seminar in Taipei on September 7, hosted by the Lenovo Taipei Design Center, to review project findings. The seminar is free and open to industry, but seating is limited. For additional details: http://bit.ly/2KR23SB

iNEMI will also discuss the FoS test in webinars scheduled for September 25 and 26. These webinars will review the iNEMI team’s development of their innovative FoS test and discuss its adoption by the electronics manufacturing industry.  For additional details: http://bit.ly/2MKAUlZ

The International Electronics Manufacturing Initiative’s mission is to forecast and accelerate improvements in the electronics manufacturing industry for a sustainable future. This industry-led consortium is made up of approximately 90 manufacturers, suppliers, industry associations and consortia, government agencies, research institutes and universities.  iNEMI roadmaps the needs of the electronics industry, identifies gaps in the technology infrastructure, establishes implementation projects to eliminate these gaps (both business and technical), and stimulates standards activities to speed the introduction of new technologies. The consortium also works with government agencies, universities and other funding agencies to set priorities for future industry needs and R&D initiatives.  iNEMI is based in Herndon, Virginia (near Washington, D.C.), with regional offices in Asia (Shanghai and Tokyo) and Europe (Limerick and the London area). For additional information about iNEMI, visit http://www.inemi.org