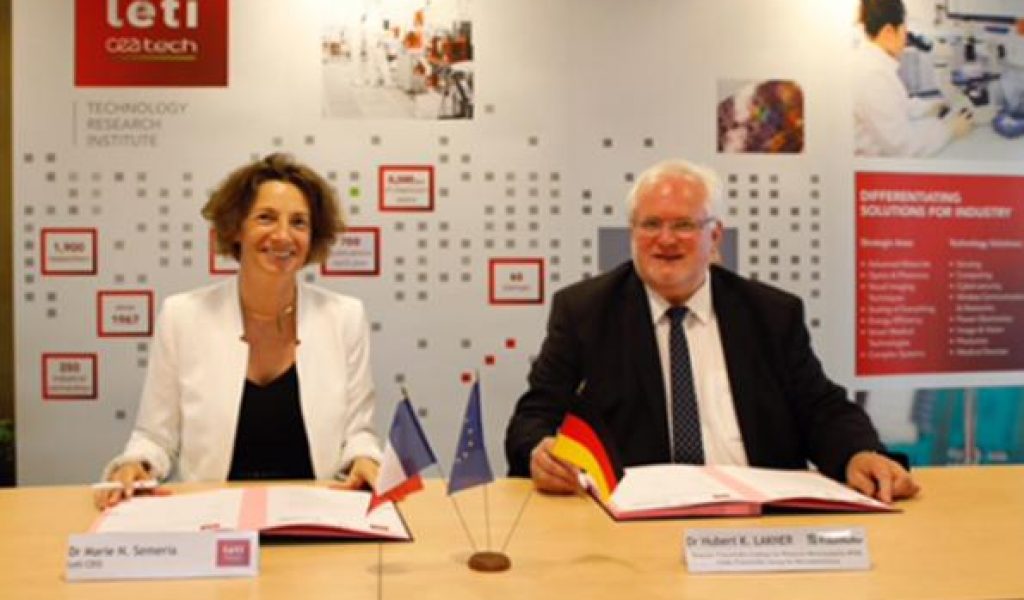 By Peter Clarke
The leaders of France’s Leti and Germany’s Fraunhofer Institute group have signed an agreement on collaboration in micro- and nanoelectronics. They did so while speaking of the need to strengthen European strategic and economic sovereignty.

The initial focus of the collaboration will be on CMOS and More-than-Moore processes and technologies for next-generation electronics components. The move  demonstrates a coming together of France and Germany in the wake of increased global uncertainty after elections in the United States and the United Kingdom.

“Micro, nanoelectronics and smart systems are key enabling technologies for the economic success of Europe, especially in France and Germany. Thus, Europe can no longer afford to scatter its research competences,” said Hubert Lakner, chairman of the microelectronics group of Fraunhofer. “The new cooperation agreement will be the starting point for a strategic research cooperation of the two countries in order to jointly support the upcoming EC initiative, Important Project of Common European Interest (IPCEI), on micro- and nanoelectronics.”

The second phase of the collaboration may be expanded with additional academic partners and other countries, as needed, Leti and Fraunhofer said.

Notably Belgium has not yet opted to join the IPCEI scheme on nano- and microelectronics and Belgian research institute IMEC has not joined in to formally align its research with Leti and Fraunhofer. Similarly, the Netherlands, home to NXP Semiconductor, is not thought to be in the scheme.

The agreement was signed today by Leti CEO Marie Semeria and Fraunhofer’s Lakner during the Leti Innovation Days event that is marking Leti’s 50th anniversary. The two groups have pledged to align their roadmaps and maximize complementarity. The two executives are also set to attend a Franco-German governmental summit in two weeks time where the strategic nature of microelectronics will be raised, they said.

The two research institutes will initially focus on extending CMOS and More-than-Moore technologies to enable next-generation components. In particular it will focus on FDSOI, sensors and power electronics and compound semiconductors for applications in the Internet of Things, augmented reality, automotive, health, aeronautics and other sectors in support of French and German industries.

“Microelectronics in Europe and France is strategic,” said Semeria. “We are facing the double challenge of sovereignty. We have to consider more and more our ability to keep the knowledge [developed here] and to understand components coming from outside.” Semeria added: “In Europe we have to face two challenges: 1) maintaining manufacturing in Europe. Opportunities in IoT and microcontrollers are rocketing. Things are changing rapidly to allow the ramping up. 2) to articulate the global supply chain.”

Lakner commented: “We don’t say our nation first. It is best we do this together.”

Lakner added that recent spending announcements by Bosch and Globalfoundries should be seen in the light of the IPCEI. Although Germany has yet to be officially notified of the scheme by the European Commission it had decided to go ahead with national investments (see Bosch to build new semiconductor fab in Dresden).

Lakner added that IPCEI covered national spending and looked for a leverage factor of 4 or 5.

Germany has earmarked €1 billion for the program with the suggestion this could unlock €5 billion or €6 billion of spending. Lakner said that 85 percentof the money would go into capital expenditure and 15 percent into R&D, and hence the relevance to research institutes.

Semeria said that the French government had not yet formally committed to IPCEI but was considered to be “in” along with Germany, Italy, Austria and the UK. The UK’s status may well be changed by its progress towards leaving the European Union although national support for a center of excellence in compound semiconductors in Wales would likely remain (see EU funds Welsh compound semiconductor research).

As to how much the French government might spend on IPCEI related investment Semeria said it would depend on how much industry was prepared to spend.