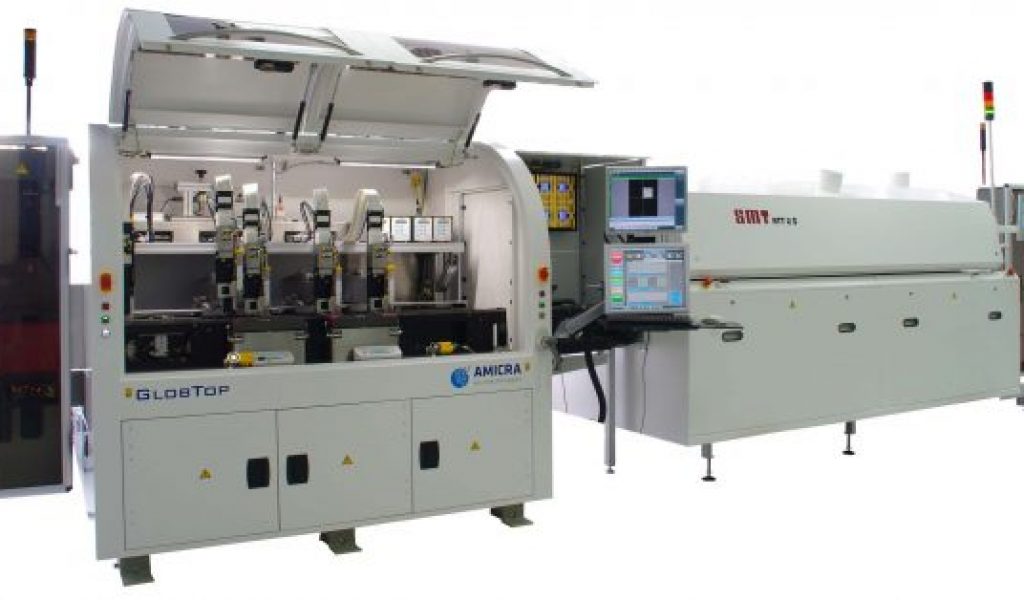 The outstanding constructive and conceptional feature of Amicra’s HDS multi-head system is its unique configurability with up to four parallel dispensing heads (for jet/spindle/time-pressure vacuum pumps). Each of these heads is located on an XYZ-axis system – along with a dispensing valve and a camera (offering automatic fiducial mapping). All can be positioned via linear motors at an accuracy of up to <10μm at 3 Sigma. HDS operates as in-line-, magazine-to-magazine-, or reel-to-reel configuration (Figures 1 and 2).

To increase throughput and shorten the cycle time when operating the HDS in its maximum configuration with four dispensing heads, Amicra is drawing on a special dispensing strategy. The component stripes to be processed are partitioned into four zones. The first two of the four dispensing systems then will deposit the adhesive in zones 1 and 3, the remaining two systems will process zones 2 and 4.

The positioning accuracy of the dispensing heads goes up to <50μm in regard to the chip position. As an option, two jet valves can be chosen for processing ASICs and the side covers of sensors utilizing two dispensing needles.

Another system configuration to be considered is to do the jetting with the first two systems, and dispensing with the two remaining needles. This would amount to a combined usage of the HDS equipment

The complexity and functionality of the HDS, never achieved up to now by any other machine, shortens the cycle time of the dispensing operation by a factor of four, while guaranteeing full component control with single device tracking. The machine can be controlled via an SECS/GEM interface (Semi Equipment Communication Standard, Generic Equipment Model) of the latest generation, and it can be connected with the manufacturing data center to let all the machines and cells within a manufacturing flow communicate and cooperate in real time. The layout of the interface, as standardized for semiconductor manufacturing environments, conforms to the Industrie 4.0 concept for general mechanical engineering usage. Besides SECS/GEM, the HDS dispensing system is also available with the worldwide standardized SMEMA interface (Surface Mount Equipment Manufacturers Association). This further simplifies its integration in various different process flows and manufacturing environments.

The HDS user interface integrates a visualization of the dispensing process as a standard feature. This allows a specific process to be chosen, modified and monitored. The user interface also enables setting up an access control regime for critical or sensitive realms of software functionality, or periodical automatic maintenance requests for the machine. This software layout significantly simplifies operator guidance. It is laid out to apply various different dispensing “recipes”, which are geared to high-volume production on a 24/7 schedule, for instance in the realm of automotive manufacturing.

All process-oriented measuring data that are obtained by the machine hardware during the dispensing process of an individual component are captured and stored in a specific file, in regard to lot, horde, or any other desired container unit. This way, any problems occurring in the process can be more easily identified by a knowledgeable operator. These data can be directly called up or downloaded from any point in the intranet, in which the machine operates. Depending on the configuration of the machine, they can also be accessed by a high-level fab host system (by means of the SECS/GEM interface).

By equipping it with an SECS/GEM interface the HDS achieves full compatibility with the user’s data management system, which transmits all pertaining component data to the dispensing unit. A direct connection with the next machine in the assembly line is realized via the SMEMA interface. This way, the material flow of the entire process carried out on this line can be controlled and synchronized. The SMEMA interface allows the integration of a machine in a very simple way.

Amicra has given special attention to guarantee the reliable execution of 3-D dispensing. HDS easily accommodates different component topographies, including various profiles and height measures. These are traced in the Z-direction by the dispensing needle. As a result, the contours of complex chip stacks, where the smaller units are placed on top of the stack, and the larger ones residing at the bottom, are processed in a step-by-step sequence. This way, the lower levels are processed first and the higher levels following accordingly.

This process organization enables an exact measurement of the substrate – in regard to the component even at several different points. Automatic weighing of the adhesive volume and measuring the adhesive placement points is feasible supported by image processing.

The exact measurement of needle, or jetter, height is another special feature of the HDS. Also included in its functionality is a provision for substrate temperature regulation and monitoring, as well as monitoring the dispensing material (jetter), and the automatic cleaning (flushing) of dispense heads. Another advantageous, and for many users even innovative, solution is the optional provision of a central tank system for the adhesive. This enables a controlled automatic feeding of the dispensing valves with the appropriate volume of adhesive material, eliminates the still widely used transfer and refill of the adhesive cartridges, and significantly reduces the complexity of the dispensing process.

In the HDS, material provisioning is realized as a special concept using two connected pressure containers (Figure 4). The first pressure container, holding about 2 Liters, is exposed to the feeding pressure to serve the jet valves. Inside this container there is another, exchangeable container, which is equipped with filling-level sensors and a pressure monitoring system.

The second pressure container takes up the customer container with a capacity of 1 Liter. This, too, is fitted with a filling-level sensor and pressure monitoring. Both containers are connected via a hose line. Two filters and a two-way valve connect them with the dispensing valve.

This finely detailed consideration of the component topographies also includes the continuous determination of the dispensed adhesive’s position. For each component, several positions can be measured, to which the instructions in the pattern are assigned.

When using a needle dispenser the needle must be positioned very close – about 0.3 mm – to the surface of the component to be processed, to compensate for any deviations in the component’s position and height. Such (minimal) deviations can occur if components have certain dimensional tolerances, or if they were not placed exactly level, but turned around or tilted. The autofocus system integrated in the camera of the dispensing head recognizes these spatial deviations and adjusts the position of the dispensing needle accordingly.

Another important element adding to the functionality of the HDS is its integrated heating station for the components to be processed. It is located within the processing area of the machine. Also located within the processing area, ahead of the adhesive dispensing stage, is a cleaning station: the Taifun Cleaner. It causes a turbulence of the pressured air on the component surface, which has undergone a ionizing radiation. Particles lifted by this radiation effect are siphoned away and collected in a vacuum chamber.

Additionally a degassing chamber for the adhesive material can be integrated in the HDS. It removes the air bubbles from the material during its passing through a vacuum chamber. This process can be easily adapted to the requirements of the user.

Positioned after the dispensing station there is an (optional) vision inspection station, which is carrying out an additional manual or automatic post-bond check of the correct adhesive deposition. It consists of a camera system with UV-illumination and a large monitor. Further customer-specific stations can be added. They can be placed directly on the conveyors (for instance for UV curing control).

Next in line is the curing oven, which is connected with the dispensing station. It can be used as two-lane or four-lane version. Accordingly, single- or dual-track shuttle conveyors are chosen, depending on industry-specific requirements. The four-lane version (from SMT) cuts the throughput time of the dispensed stripes in half.

When fully equipped with four dispensing pumps (in all standard technologies) on a flexible platform, achieving a short dispensing time of 0.5 seconds per component (depending on the pattern and number of components per stripe), offering vision mapping of global and local fiducials, and achieving a dispensing accuracy in the XY direction of +50μm (3 Sigma), the Amicra HDS constitutes a paradigmatic extension of the traditional dispensing process. HDS achieves an unusually high processing speed, which up to now was available only with specially engineered systems. HDS now offers this achievement in a standard product for in-line operation with user-specific options.