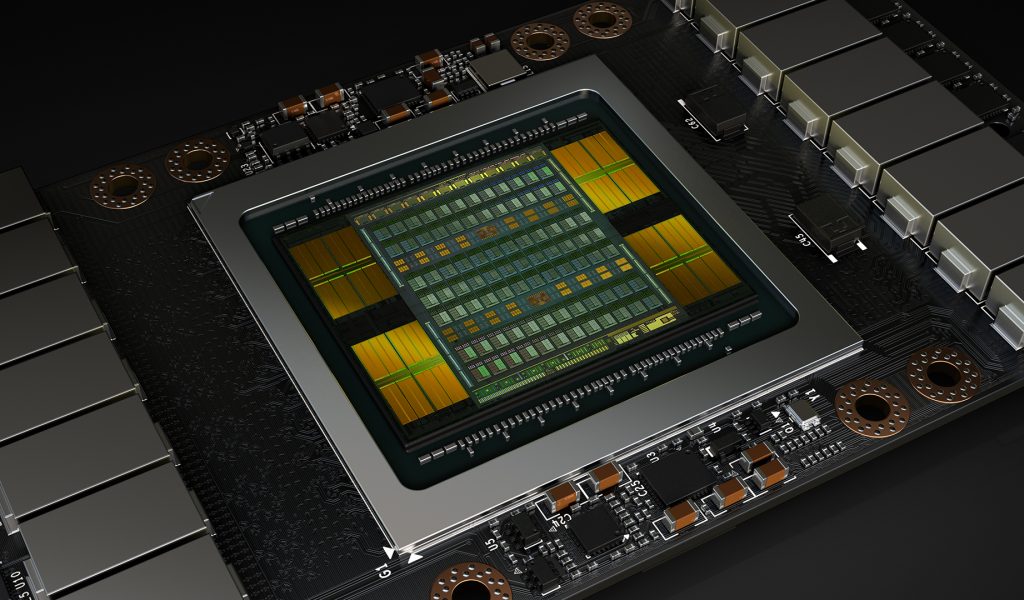 Shares of graphics chip technology pioneer Nvidia (NVDA) are down $10.54, or 6.4%, at $154.20, in late trading despite the company beating analysts’ revenue and profit expectations by a wide margin for its fiscal Q2 report, and forecasting revenue head for this quarter as well.

Following the company’s conference call with analysts, chief executive Jen-Hsun Huangwas kind enough to take some time to talk with me by phone.

Huang said there are three “big vectors” that are showing up: Big Data, A.I., and gaming:

The big vectors are, on the future of computing, really it’s about big data, and data-intensive computing, and our work in GPU computing has proven to be the ideal platform, and we are seeing adoption all around the world. Second, the next revolution is AI at the edge, and the most visible example is autonomous vehicles. And our strategy to build a platform from the ground up, for levels 3 through 4 through 5 of autonomous driving, was the right one, and we are seeing one company after another adopt that platform. And the third thing is that video games are the largest form of entertainment in the world, and the two fastest-growing platforms in gaming are GeForce [Nvidia’s gaming GPU brand] and Switch [Nintendo’s (NTDOY) Switch portable gaming console, which runs on Nvidia GPUs].

I asked Huang about his company’s involvement in the chip-industry effort known as RISC V, which is an outgrowth of the “reduced instruction-set architecture” model of computing that mostly dominates chip design.

Huang was enthusiastic about Nvidia’s decision to give technology to the open-source effort:

We designed a deep learning accelerator, the “DLA,” and it’s probably the best anyone has ever designed, and we open-sourced it. RISC V is an open source company, and they asked us if we might work with them to put our DLA into it, and so we are going to give it to the community. How it benefits Nvidia is that the more people who receive deep learning computing, the more demand there will be for deep learning. And two, the DLA is supported by our Tensor RT, and so that’s how we extend the reach of our platform

Following that, I asked Huang about competition from RISC V-based chips. In an article for Barron’s back on July 1st , I quoted chip legend DavidPatterson, the originator of RISC and the proponent of RISC V, as saying that some programmable processors based on RISC V could be a more cost-effective approach to some data center tasks than either microprocessors, FPGAs, ASICs, or GPUs.

Huang dismissed such a notion.

“The world of computing is much more complicated than one microprocessor with a couple of extensions added to it.”

Among details gleaned on the conference call was that the roughly $250 million beat in revenue last quarter compared to the company’s own forecast was essentially driven by Nvidia parts being used for crunching of numbers for “mining” in Blockchain and crypto currencies such as Ether and Bitcoin.

That revenue shows up in Nvidia’s “OEM and IP” segment. The surge in sales to “miners” of the currencies offset the “lapse” of the company’s license payments from Intel (INTC) for GPU technology. An additional factor was sales of GeForce gaming cards to video gamers who hadn’t gotten orders filled in the prior quarter.

Details on the segment-by-segment results can be found in a supplementary earnings document posted by Nvidia on its Web site.

Huang told analysts if one “reverse engineers” revenue for the sales of chips for crypto currencies, it was about $150 million in the quarter.

That crypto market is particularly interesting because it has emerged as a market for Nvidia only recently, whereas analysts have long worried about the expected shortfall as the Intel license payments go away.

One analyst asked Huang about his expectations for the crypto-currency market, and he was very upbeat, and was not concerned about the apparent “volatility” in the market, a reference to the ups and downs of the currencies themselves:

Yes, thanks. Crypto currency and block chain is here to stay. The market need for it is going to grow. And over time, it will become quite large. I — it is very clear that new currencies will come to market. And it’s very clear that the GPU is just fantastic at cryptography. And as the new algorithms are being developed, the GPUs are really quite ideal for it. And so this is a market that it’s not likely to go away anytime soon. And the only thing that we can probably expect is that there will be more currencies to come. It will come in a whole lot of different nations. It will be — it will emerge from time to time. And the GPUs is really quite good for it. What we’ve done in our strategy is to stay there very close to market. We understand its dynamics really well. And we offer the coin minors a special coin mining SKU. And this product is — this GPU configuration is optimized for mining. We stay very close to market. We know its every single move, we know its dynamics. And the last thing that I can say is that the larger of a GPU company you are, the greater ability you could absorb the volatility. And so between the combination of the fact that we have GPUs at just about every single price point, we have such big incredible efficient designs that we’re so close to the marketplace. And because we have such large volumes, we have the ability to rock ‘n roll as this market suggests. But this is an important market that likely will continue to grow over time.