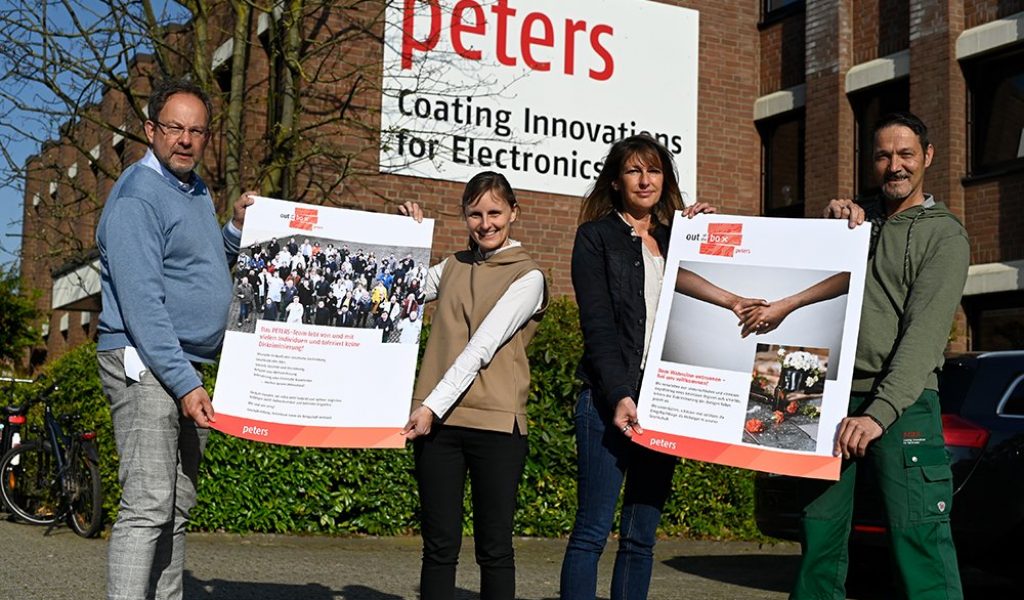 No place for discrimination – we are taking any form of discrimination personally! According to this statement, Peters has launched an anti-discrimination campaign in a joint initiative of the Works Council and the Management. With the logo ”Out of the Box“, the Peters team in Kempen wants to make clear that aspects such as ethnic origin, gender and age, sexual orientation, religion and ideology, disability and chronic illnesses do not make a difference. “That’s why we are act thoughtfully ourselves, warding off possible beginnings by paying attention and taking bold action,” says employee Eva Hermanns, who, together with Markus Tzschoch, represents the works council in the anti-discrimination work group. In order to lay an emphasis on this initiative, Peters has appointed contact persons among the staff.

“We all agree: Through this campaign, we want to show our employees that we fight any form of discrimination and follow a zero-tolerance limit,” explains Britta Alfes, member of the Management team. This attitude is the basis for a proactive approach to the anti-discrimination issue. In the coming weeks and months, poster campaigns and postings in social networks shall draw the attention to issues of racism, disadvantage and discrimination.

By means of this company campaign, the work group not only appeals to the staff to be more mindful of their own words and actions in the workplace and beyond, but also to react more carefully to the behaviour of others. “Discrimination concerns us all and must not be tolerated,” says Markus Tzschoch. To kick off the campaign, the work group presented Peters employees with a booklet on the General Equal Treatment Act, published by the Antidiskriminierungsbüro e.V. (registered association on anti-discrimination). The group identifies completely with the contents of this brochure.

CEO Ralf Schwartz, also a member of the work group, underlines the high internal significance of the initiative: “Our corporate culture at Peters commands to nip any discrimination in the bud, thus ensuring that all employees feel comfortable with us in respectful and appreciative dealings among each other where they can rely on our full support”.

As Peters understands, the subject “Out of the Box” also includes solidarity with the Ukrainian war refugees, which is documented, amongst others, by a blue and yellow ribbon prepared by the staff. “Escaped the madness – welcomed by us!” is written on a second poster that has been printed and is being distributed at the start of the anti-discrimination campaign. “We strongly condemn the inhumane and senseless war of aggression by a totalitarian regime and reject discrimination against the people there,” says Markus Tzschoch. “However, people of Russian origin working peacefully at Peters in Kempen must not be discriminated either,” adds Ralf Schwartz.