Positive End to 2016 … but Watch Chip Foundries, Seasonality and the Strong Dollar 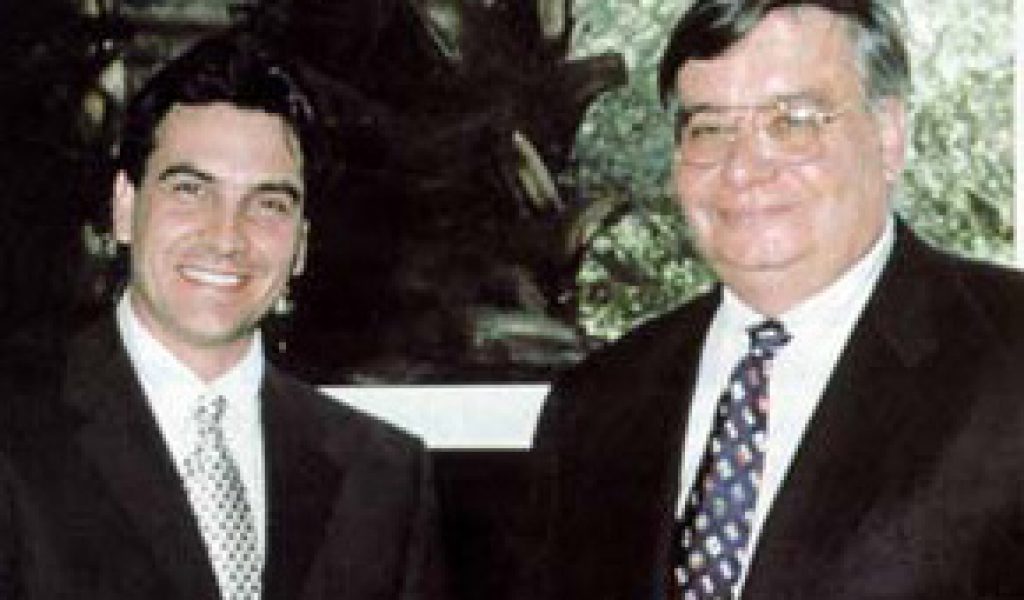 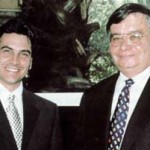 Positive End to 2016 . . . but Watch Chip Foundries, Seasonality and the Strong Dollar 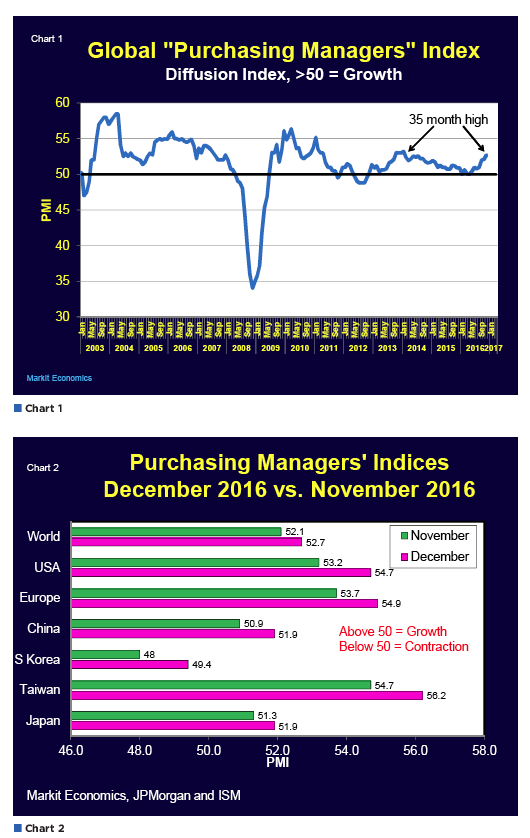 2016 ended with some positive data. The Global Purchasing Managers Index finished the year on a 35 month high (Chart 1) as all major regions (Chart 2) saw late year manufacturing expansions (PMI>50). This suggests continued growth in early 2017 on a seasonally adjusted basis.

Consumer driven volume electronic equipment production continues to be dominated by China –which had a relatively strong December but is now likely to have begun its normal winter seasonal downturn (Chart 3).

As we enter 2017 the U.S. dollar has strengthened significantly, rising to its highest level since 2001 (Chart 4). One result is of course cheaper imports and more expensive exports for U.S. based companies. However the strong dollar also affects dollar-denominated global growth rate calculations as weaker foreign currencies are consolidated into stronger dollars (Chart 5).

While dollar denominated global electronic equipment growth rates are near breakeven when calculated at constant 2016 exchange, they dropped to a preliminary estimate of minus 3.6% at fluctuating exchange in the fourth quarter of 2016 vs. the same quarter of 2015. Since company financials are calculated at fluctuating exchange, expect multinational companies who report in dollars to show a currency-related negative impact on fourth quarter revenue growth.

In Asia, the Taiwan-listed ODM companies saw revenues decline 1.6% in local currency for total 2016, but had a 2.5% sales increase in December 2016 vs. December 2015. In the longer view ODM growth has slowed dramatically from its strong double-digit increases a decade ago to an actual decline in 2016. Electronic equipment growth in general has flattened and the ODMs are feeling the impact. Until another volume end market product rivaling PCs, media tablets and smartphones develops, global electronics growth will be modest. Automotive is the best near term hope. 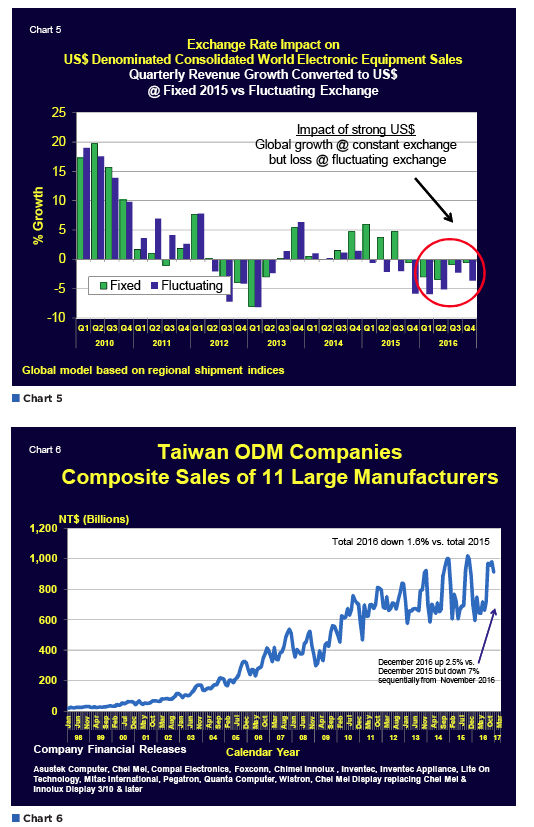 While total electronic equipment growth is flat, thanks to increased semiconductor content (and some over ordering) chip shipments grew in late in 2016. However, wafer foundry sales (a leading indicator of global semiconductor shipments) dropped in December so chip growth may also soon slow.

Business conditions are not bad but they certainly require care monitoring! 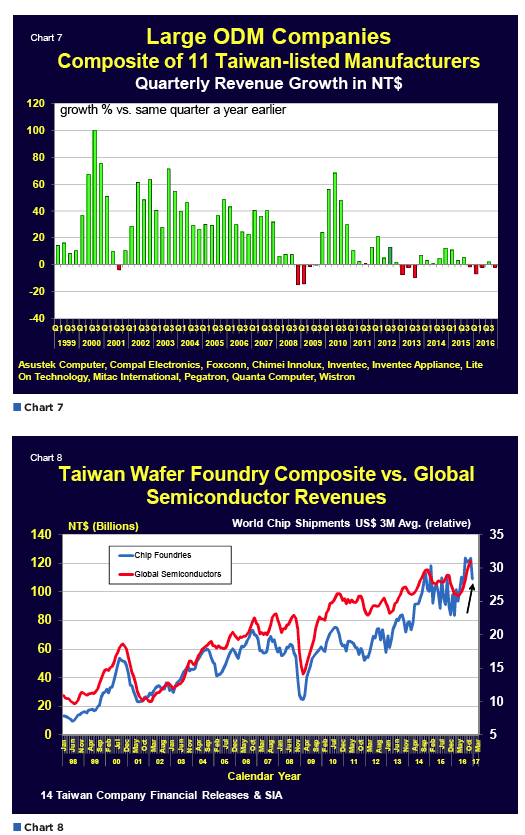 • Gaming simulator market is expected to expand at more than 17% CAGR to USD 7.8 billion by 2021. –Technavio

• In-vehicle networking market will reach $1,366 million in value for 1.38 billion units by 2022. –RnRMarketResearch

• Smartphones’ flexible AMOLED panel shipments are on track to triple y/y to 150 million units in 2017. –Digitimes

• Collaborative robot hardware market is expected to reach $1,960 million by 2021. –Research and Markets

• Artificial intelligence market is estimated to expand at a 45% CAGR to USD 16,274 million by 2022. –Research and Markets

• Drone market is forecast to grow an average 32% per year over the next decade to $30 billion. –ABI Research

• and Sharp jv plans to build a $8.8 billion LCD plant in China.

• plans to automate production at its factories in China in three phases, aiming to fully automate entire factories eventually. –GM

• Singapore invested US$60 million in Smart Technologies for 84.2% stake.

Industrial Company of Informatics, Communications and Electronics Computer opened a tablet and laptop assembly shop in Cuba with 120K units per year capacity.

Kinpo increased its workforce from 400 workers to between 1,000 and 1,500 in Indiana to accommodate more orders for its XYZprinting 3D printers and Dyson vacuum cleaners.

Salcomp bought the factory inside Nokia SEZ near Chennai, India.

• applied for permission to expand its plant in Bengaluru, India.

• is expanding ODM handset production capacity at its existing plant in the suburb of New Delhi from 600,000-700,000 units to two million a month.

• purchased US$195 million in equipment for Kunshan subsidiary for the next-generation iPhone manufacturing.

FPCB industry will grow at a 10.4% CAGR to $27 billion by 2022 on IoT, automotive electronics growth. –Allied Market Research

E-scrap and printed circuit board e-Scrap market is expected to grow from 43.7 million units in 2015 to 70 million units by the end of 2026. –Transparency Market Research

PCB market share for automotive was about 9% of total PCB usage in 2016, but in a few years, it may reach 12% as ADAS (adaptive driver assistance system) is being adopted and many more EVs and Plug-Ins are being sold. –Dr. Hayao Nakahara

All Flex added a library of videos about flexible circuitry at http://www.allflexinc.com

Apple’s bareboard purchases are estimated to be $5 billion/year, about 8% of the world’s yearly PCB consumption. –Dr. Hayao Nakahara

Branded motherboard shipments are forecast to drop 5-10% in 2017 due to weak demand from China. –Digitimes

Eltek sold all of its Kubatronik-Leiterplatten shares to Alois Kubat, Kubatronik’s only other shareholder and founder.

Epec is celebrating 65 years of manufacturing in 2017.

GSPK Circuits bought an extra acre of land in Boroughbridge to accommodate future development of its PCB manufacturing business.

Micropack invested in a Nuvogo 800 Direct Imaging solution from Orbotech.

Ruwel had a fire that destroyed its innerlayer building in Geldern, Germany.

Electronic adhesives market will grow at close to 10% CAGR through 2021, driven by miniaturization in electronics industry. –Technavio

Electronics based conformal coatings market revenue is expected to grow from more than USD 1.6 billion in 2014 to above USD2.5 billion by 2023. –Global Market Insights

CVD Equipment purchased certain assets (including all of the IP) formerly owned by Tantaline A/S of Nordborg, Denmark.

DKL Metals is celebrating 30 years of solder manufacturing in the UK.

GOEPEL electronic co-founder, Manfred Schneider handed over the office to his son Jörg.

Seica set up a new competence center in Karlsruhe, Germany.

Worldwide semiconductor capital spending is projected to increase 2.9% y/y in 2017 to $69.9 billion. –Gartner

China added over US$70 billion in semiconductor equipment and materials from 2004 through 2014. –SEMI

Insulated gate bipolar transistor and super junction metal-oxide semiconductor field effect transistor market is expanding at 11.6% CAGR from US$4,780 million in 2012 to US$10,100 million by 2019. –Transparency Market Research

Photonics market value is expected to grow at an 8.4% CAGR to 724 billion USD by 2021. –Markets and Markets

Semiconductor ceramics materials market will expand 8% y/y over next 3 to 5 years after declining 2% y/y to ~USD1.16 billion in 2016. –TECHCET CA

Semiconductor wafer cleaning equipment market is expected to grow at a 7.7% CAGR from US$4 billion in 2016 to US$7.3 billion by 2024. –Transparency Market Research

Bio-electronics and biosensors market size is forecast to grow at over 10% CAGR from USD 11.4 billion in 2013 to over USD 25 billion by 2023. –Global Market Insights