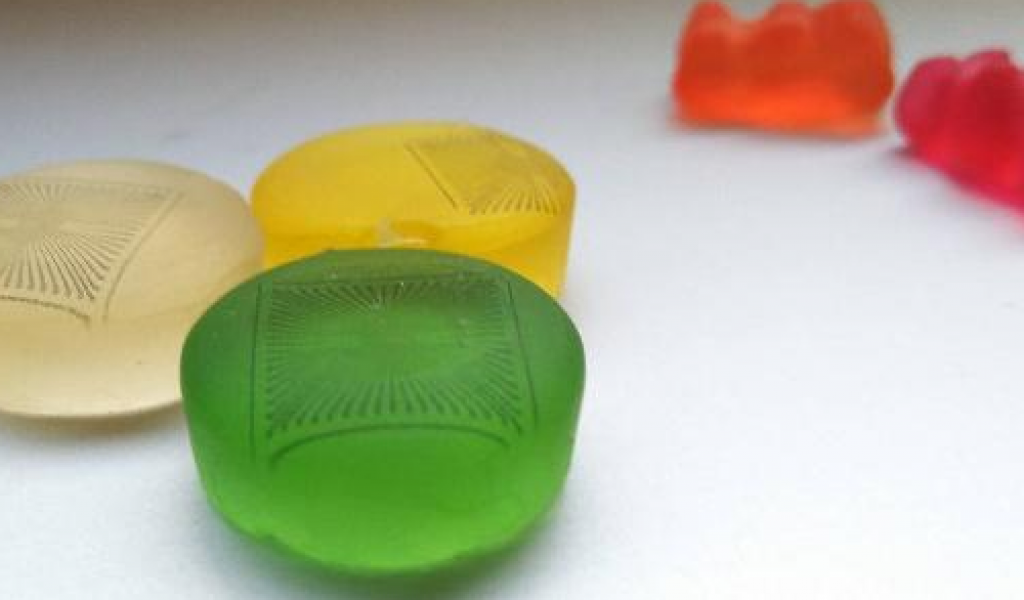 Microelectrodes enable us to measure electrical signals directly on the brain or the heart. However, for such applications, soft materials are needed; and the printing of electrodes on soft surfaces has proven difficult and can — currently — only be realised with great effort.

A team from the Technical University of Munich (TU München) has now succeeded in printing them directly on various soft surfaces.

Teams from TU München and the Forschungszentrum Jülich jointly succeeded in printing microelectrodes on a gummy bear. What, at first, sounds like a gimmick might change medical diagnostics. On the one hand, the scientists around Prof. Bernhard Wolfrum did not print a picture or lettering, but a microelectrode array. These devices consist of a large number of electrodes and can measure changes in voltage between the inside and the outside of a cell. These occur, for example, when nerves or muscle cells are active.

On the other hand, gummy bears have a characteristic that is particularly important for the use of microelectrode arrays on living cells: they are soft. Microelectrode arrays have been around for a long time. In their original form, they are made of hard materials such as silicon. In contact with living cells, this results in various disadvantages. Under laboratory conditions, the shape of cells change for example. Implanted, they can cause inflammation and may affect the functioning of organs.

With electrode arrays on soft materials, these problems can be avoided. Which is the reason why they are intensively researched. So far, traditional methods are used that are relatively time-consuming and depend on an expensive special laboratory set-up. “If you print the electrodes instead, you can produce a prototype comparatively quickly and cheaply and rework it just as easily,” says Bernhard Wolfrum, Professor of Neuroelectronics at the TU München. “Such ‘Rapid Prototyping’ allows for completely new ways of working.”

Prof. Wolfrum and his team use a high-tech version of an inkjet printer. The electrodes themselves are printed with carbonaceous liquid. To keep the sensors from recording unwanted signals, a neutral and protective layer is applied to cover the carbon tracks.

The researchers tested the process on various materials, including the soft silicone PDMS (short for polydimethylsiloxane), the substance agar frequently used in biological experiments, and finally gelatine, including a molten and re-solidified gummy bear. Each of these substances has properties that are particularly suitable for certain applications. For example, gelatin-coated implants can reduce unwanted tissue reactions.

The team was able to prove that the sensors provide reliable data values by experimenting with cell cultures. With an average width of 30 microns, they also allow for measurements on a single or just a few cells, which is difficult to achieve with established printing methods.

“The difficulty is fine-tuning all the components – both the printer’s technical settings and the composition of the ink,” says Nouran Adly, main author of the study. “In the case of PDMS, for example, we had to resort to a pre-treatment we developed to keep the ink on the surface at all.”

Printed soft microelectrode arrays could be used in a variety of fields. Not only are they suitable for a rapid prototyping approach in research, they could also change the way patients are treated. “In the future, similar soft structures could monitor nerve or heart function in the body or even serve as a pacemaker,” says Prof. Wolfrum. He is currently working with his team to print more complex, three-dimensional microelectrode arrays.

On the other hand, they are researching printable sensors that do not react to voltage fluctuations but selectively to chemical substances.

Further information on this topic is available on the website of the Technische Universität München.