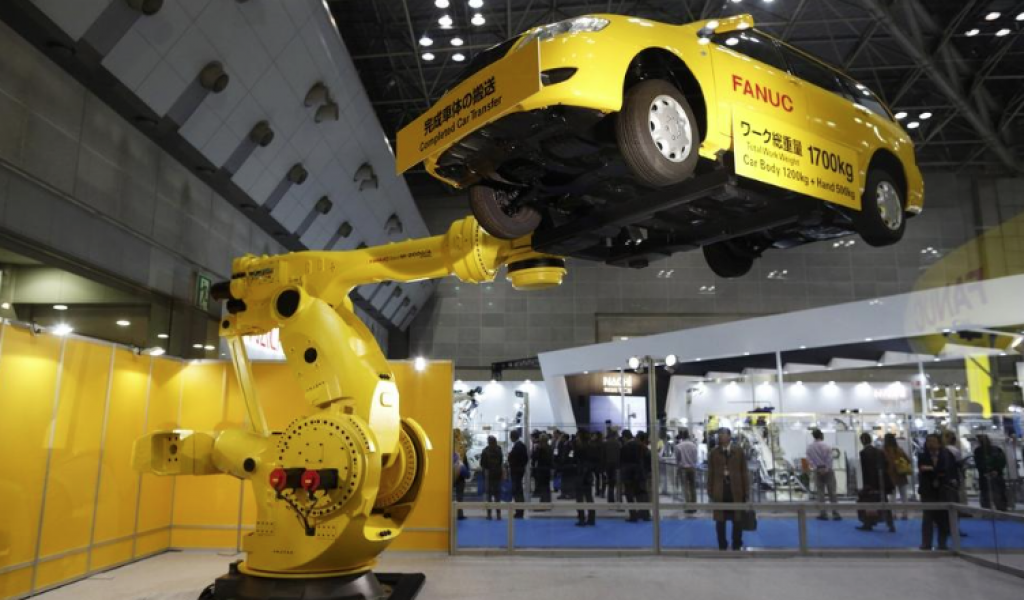 “They just don’t understand it,” says Vik Singh, the co-founder and chief executive officer of Infer Inc. in Mountain View, California. “And they don’t believe it.”

Vik Singh’s company has powerful artificial intelligence software that helps firms hunt down the best sales leads. Getting somebody to use it — well, that’s a story that says a lot about the U.S. expansion.

U.S. businesses have every incentive to adopt labor-saving technologies, replacing factory workers with robots and desk jobs with smart software. In some areas, such as finance, machine decision-making is advancing quickly. In others, there are obstacles. Overall, while the penetration of automation in the economy is happening, it is taking place at a slower pace than futurists expected.

Singh tells customers how his system can help trim sales prospecting staff and boost revenue. Managers are intrigued but sometimes reluctant to entrust a high-touch business such as sales to a black box.

“They just don’t understand it,” says the co-founder and chief executive officer of Infer Inc. in Mountain View, California. “And they don’t believe it.”

Hundreds of companies are trying to disrupt the way we consume, work, or move. The economy’s growth potential could be higher if smart machines could turbocharge how humans go about their tasks. Higher productivity, or output per hour, would boost corporate profits and may help U.S. workers finally get a pay raise.

But that economic nirvana just isn’t happening yet.

Productivity in the U.S. rose only 1.1 percent last year, and rather than being replaced by technology, more workers are being hired. Employers have added an average 159,000 new jobs a month so far in this expansion compared with 99,000 in the previous upswing. Over the same period, investment in intellectual property products, such as software, has barely edged up as a share of GDP versus the last cycle.

“Low labor productivity is the biggest problem with the story that I tell,” said Andrew McAfee, co-director at the Massachusetts Institute of Technology’s Initiative on the Digital Economy and co-author of “The Second Machine Age,” a book about the next wave of technology. “Some of these pretty profound innovations are going to take time to diffuse.”

There isn’t a single story that explains why second-wave technologies are trickling rather than flooding into the economy. Bloomberg News spoke with several to find out how the pace of technological adoption is proceeding. Here are some of the themes that emerged:

• Robots can handle highly repetitive tasks in manufacturing, but at BMW’s largest plant in the world, located in Spartanburg, South Carolina, the talk is about complexity and customization — tasks that need human input.

• Finally, when it comes to turning any critical operation over to a computer, there is this one big sticking point: trust.

Here are some of their stories:

♠ Social Tables helps companies with event space sell it to planners who need it, while also providing collaborative tools. The Washington-based company started using Infer about three years ago after launching a mobile app that gave it about 12,000 new sales leads.

The event space and planning market is large and varied. Sorting through those leads to find potential subscribers would have been a gigantic human task, said Trevor Lynn, the chief marketing officer. The company also turns up about 3,000 new leads a month.

Social Tables had a couple of choices: Hire an expensive database engineer or many more salespeople to sift the data. Instead, they use Infer, which sorts, queries and offers up live feedback on how the leads are performing. This kind of big-data hunting and vision would be difficult for any human to replicate in real time.

“We don’t need as many lead qualification folks,” Lynn said. While Social Tables didn’t replace anybody with Infer’s software, “it definitely shapes your hiring map in the future,” Lynn said.

Social Tables is the typical Infer customer — a young, fast-adapting company that is looking for ways to use technology to save money and move quickly. “One less person means more decisions in a rapid manner,” Lynn said.

Getting more-established companies to use the software is challenging, said Singh, who previously worked at Alphabet’s Google. About 25 percent of Infer’s customers have been around 10 years or more.

“The biggest bottleneck to machine learning is trust,” he said. As a result, finding the “hero CEO” who will tell their shareholders they are trimming a sales team to rely on a black box is difficult. “If we can create these technologies that build trust I am very confident we will be able to leverage that in a new way,” Singh said.

♠ From baggage carousels to shifting stages at a rock concert, a motor made by SEW-Eurodrive Inc. is probably the workhorse making things move.

Some of the most efficient manufacturing of precision casing and gearing this German company produces happens in a bustling plant on Old Spartanburg Highway in Lyman, South Carolina. Eighty percent of the plant’s production is exported.

In 2000, there were no robots on the factory floor. Now there is one robot for every human, most made by Japan’s Fanuc Corp.

The infusion of automation into the plant didn’t push out a single worker. Robots added scale. The plant will produce 500,000 components this year, up from 78,000 in 1999. Total staff is up just 6 percent to 148 people.

The plant is so lean the humans are having a difficult time keeping track of all that robots need and do. Call it a robot saturation point.

The next big boost in productivity is likely to come from an unexpected place — digital information, managers here said.

SEW Eurodrive is looking for a system to feed data from its production machinery into a computer dashboard that gives operators a real-time look at plant performance rather than scurrying around with clipboards.

“If we can make that product a little faster without jeopardizing quality or safety, then we win,” said Melvin Story, a supervisor at the plant.

If a robot is having trouble with a line of components, a human can be on the problem faster. If there is a maintenance program coming up, they can do it on time before something fails.

Melding big data with manufacturing is the next step for hundreds of companies, and it is challenging, said Bryan Tantzen, head of manufacturing and industry solutions at Cisco, the networking-technology giant.

“You have to connect these machines to transform them,” he says. There are obstacles. Not all machines are loaded with sensors. Information-technology staff can be different from operational-technology staff. People responsible for robotics can view networks as insecure and unreliable.

“That OT/IT divide is a huge barrier to adoption,” Tantzen said, and the infusion of new technology into manufacturing has slowed in recent years, partly due to cost-cutting.

Eventually, big data will be a reality on the plant floor, he said, because there is a constant need to push up profits and productivity. “I think it is really about to hit an inflection point and accelerate, and therefore drive productivity.”

♠ BMW’s Spartanburg plant — the largest BMW factory in the world by volume that sprawls over 6 million square feet — is the highly-automated car maker that technologists talk about.

The hype around robotics suggests a world where humans have little input in manufacturing. Talk to BMW managers, however, and it’s all about getting the right mix of humans and machines in a world where customization and complexity are big challenges.

Almost every one of the 1,400 X-series SUVs rolling off the line here each day has been custom ordered by somebody. While about 1,600 robots weld, drill and paint auto bodies in steel cages, further down the line the cars are surrounded by humans adding this audio system or that trim. Humans are paying close attention to look, feel, smell and even the sound of these cars to ensure BMW authenticity.

“You can build a car for months and months, and never build the same car twice,” says Steve Wilson, a spokesman for BMW Spartanburg.

If there is one lesson from the team here, it’s that robots move processes while humans improve them, according to Richard Morris, vice president of product integration, who has been with BMW in Spartanburg since 1993. Morris says technology is good for “transactional jobs.” He adds: “There is something that we call transformation and that is something only a human can do.”

“When you put automation out there you are just living in the status quo, but with people you are constantly improving the process and finding ways to make it better,” Morris added. “Sometimes it is better to start with people.”

Managers are constantly on the lookout for new ways to insert more automation. One recent addition: a small “co-bot,” working next to humans that rolls protective foil on a door frame. Having a machine do this simple task several hundred times a day saves time and wear on human hands.

But the company’s continuous improvement wall, a display where they show dozens of small refinements created by their team, doesn’t feature a single robot.

“I have never been inspired to do more by a robot, I have never gotten any ideas on how to improve something on the shop floor from a robot,” Morris said. “Little improvements every day add up to efficiency, and we are adding more cars and we are still hiring.”