Robots are on the rise in Malaysia 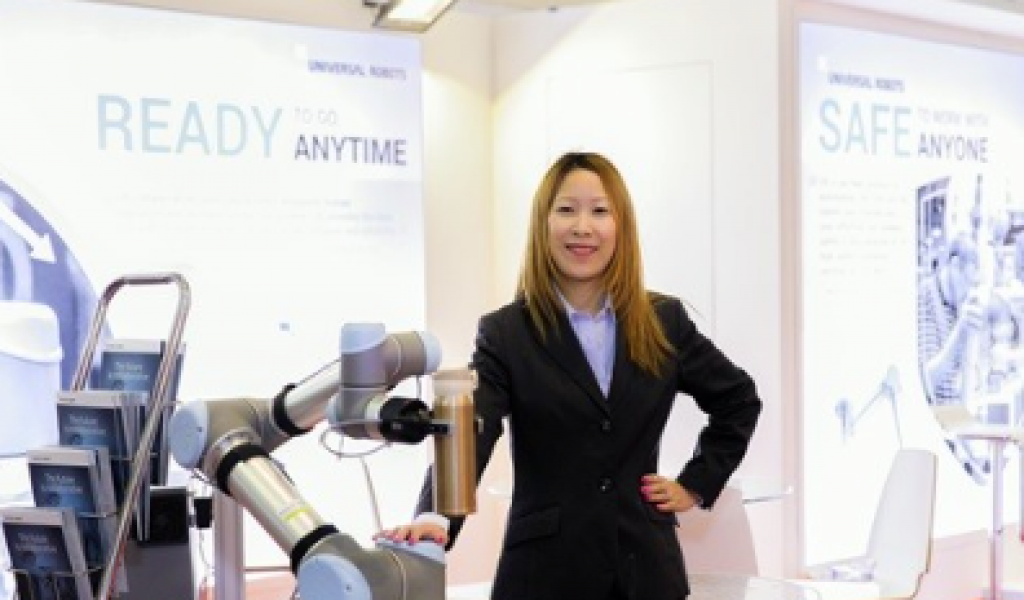 Photo – A ‘cobot’ in Malaysia

A Danish robotics company has doubled its network in Malaysia to meet the increasing deployment of robotics in the country.

Last year, the World Robotics Report found that the deployment of robots in Malaysia increased by an average of 8 per cent annually between 2010 and 2015.

Speaking in Malaysia, Shermine Gotfredsen, who is general manager, Southeast Asia and Oceania at Universal Robots (UR)  said that the adoption of automation has allowed Malaysian companies to increase production volume by as much as 300 per cent on average, without significant payroll expansion.

Some companies have also reduced defects by as much as 90 percent by automating operations, she said, adding that the local increase is echoing a global surge in demand for robots across industries in the last five years, which is reflected in UR’s business growth.

The company, which has been expanding its distribution channels in many markets, now has more than 300 distributors in more than 55 countries worldwide.

She said that UR generated revenue of DKK 662 million in 2016, a 58 per cent increase from 2015. The company expects revenue growth of 50 per cent or greater in 2017, keeping the company on track to reaching DKK 1 billion revenue by the end of the year.

“Malaysia is a key market for Universal Robots in Southeast Asia due to its active interest and high demand for automation,” Gotfredsen said. “While we have experienced growth across the region, Malaysia has seen significant growth due to the diversity of the country’s industries.

“This means there is a wide spectrum of potential applications of UR cobots across different sectors,” she said, explaining that the company now has a growing network of distribution partners in three main regions – the Klang Valley, Johor Bahru and Penang to meet the growing demand for robotic automation solutions in the country, which has increased by 40 per cent from 2010 to 2015

She also said that since its entry into the Malaysian market in 2013, Universal Robots has been actively expanding its distribution bases. In Malaysia, its collaborative robots (cobots) are distributed by DF Automation, EPCO Precision, PBA Systems, and TMS Collaboration, and are widely deployed in industries such as electronics, automotive, metal, medical, pharmaceutical, plastics & polymers and consumer products.

TT Vision Technologies, a system integrator in Malaysia, uses UR cobots to develop customised automation solutions to address its customers’ needs. It offers end-user organisations high performance PC-based vision system solutions using UR cobots for a wide range of industries such as semiconductors, PCB assembly, lead frame, pharmaceutical and medical. The company has been working with UR cobots since 2016 to create automated solutions used by end-users in high speed production lines; performing a 100 per cent visual inspection in critical production processes with real time feedback to minimise defects and improve overall production yield.

Goon Koon Yin, director, TT Vision Technologies said: “Our projects are mainly focused on enhancing operations in small part assembly works for electronics manufacturing clients with the aim of allowing them to achieve higher quality, consistency and higher return on investment. Universal Robots’ extensive experience in automated and collaborative assembly operations convinced us that they are the right choice for us to enable our clients to achieve their automation objectives. Their support channels have been very effective in helping us offer better automation solutions to the end-users.”

Looking a little ahead

“We recognise the importance of the Malaysian market, and have doubled our distribution network, consisting of distributors and system integrators, since 2016 to provide our automation solutions across the country,” said Gotfredsen. “This comes at a time when businesses are increasingly investing in innovative automation technology to stay competitive amid macroeconomic challenges.”

“Businesses, especially those with tight operating margins like SMEs, need to look for ways to maximise their resources without compromising production quality,” said Gotfredsen.

“There is growing demand for robotics and automation in Malaysia,” she emphasised.“We believe our state-of-the-art cobots are the right tools to achieve this goal. Malaysia and Southeast Asia, like much of the world, is seeing rapid growth in the demand for industrial robots.”

“Manufacturers are turning to automation to improve product quality, productivity, and profits through long-term enhancement of reliability and cost reduction in overall industrial operations,” added Gotfredsen.