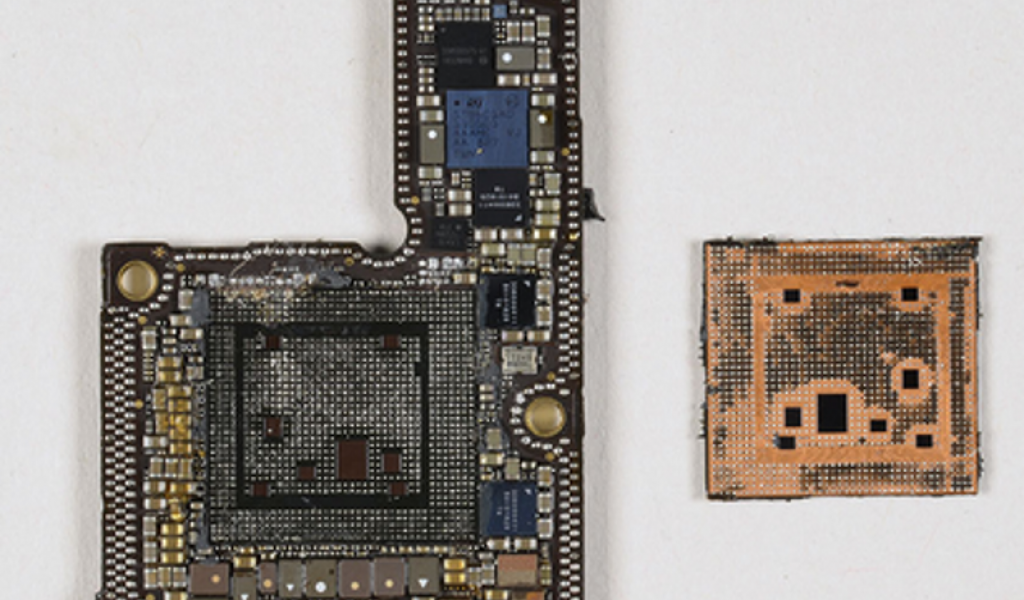 Three major teardowns of Apple’s latest iPhones provide insights into the much-watched internals of these highly compact handsets. The Apple iPhone XS has a similar arrangement of components as the prior iPhone X, according to images from a Dutch website that has become the first to post a teardown of it.

Separately iFixit posted a teardown identifying some of the new iPhones’ components and TechInsights started its work on a more in-depth teardown that ultimately will include BoM costs and explore chip internals. Images and information from all three teardowns are included in the following pages.

The biggest finding from the teardown by FixjeiPhone is that the XS battery is a single unit fitting in approximately the same L-shaped space as two batteries that Apple used in the iPhone X (below).

However, the new battery is slightly smaller at 2,658 mAh compared to 2,716 mAh for the prior handset. The iFixit teardown showed that’s due to a notch in the XS battery to provide room for thermal expansion. Apple touted 30- to 90-minute battery life increases with its latest handsets, likely due to more power-efficient components such as its 7-nm A12 Bionic SoC.

One of the interesting aspects of the new logic board in the iPhone XS is its use of a virtual backplane made up of more than a dozen connectors for the handset’s many functions. While not necessarily novel, it testifies to the miniaturization of mechanical design in today’s smartphones.

FixjeiPhone did not attempt to identify any components on the board, something that typically requires experts such as TechInsights given often obscure or nonexistent markings on the chips. Over the next day, more news should emerge from TechInsights, iFixit, and others. For example, it will be interesting to see whether the handsets continue to use cellular basebands from Qualcomm given that the two companies are locked in massive patent battles.

Meanwhile, TechInsights has started posting images from an iPhone XS Max teardown but, so far, no information on semiconductors. (See Pages 5 and 6 of this report or the full TechInsights report here).

The front camera module in the iPhone XS shows Apple’s extensive use of flexible cables. They act as important variables, giving engineers wiggle room for piecing together the many puzzles of today’s handsets.

The site’s full teardown shows how flex cables pull together a system of modules. It also revealed how much by-hand assembly is still required to make the handsets. Meanwhile, TechInsights has started posting images from its teardown-in-progress.

Separately, TechInsights has started posting its own pictures of a teardown of an iPhone XS Max, Model A1921 with 256 GB. It peeled back covers on logic boards to reveal the underlying chips but has not yet posted any identifying information about them.

TechInsights took it one step further, taking off the lid of the A12 Bionic SoC at the heart of the iPhone XS Max. It noted the move to face recognition means Analog Devices and NXP have lost design wins for fingerprint-related chips while Finisar won a VCSEL slot and Lumentum now provides a dot projector.

The iFixit teardown noted two new Apple-branded power management chips in the iPhone XS and XS Max. Here’s a list of all the chips and their markings that it identified on the front of the iPhone XS main board:

Chips used on the iPhone XS Max were generally similar although they had a different placement. And here’s its listing of chips on the back of the XS main board: