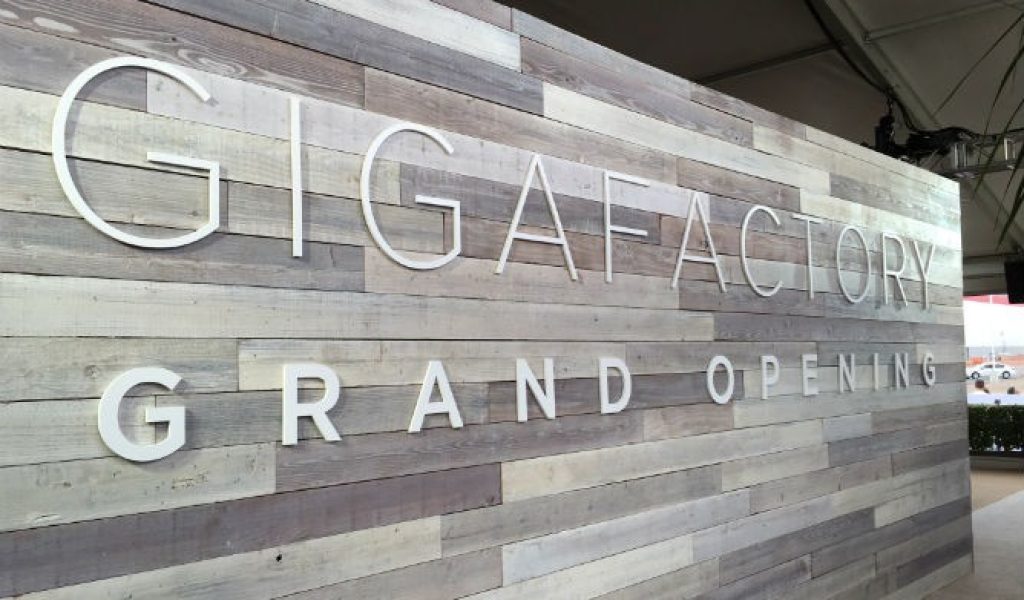 Last Friday, hundreds of Tesla vehicle owners and their invited guests celebrated the official opening of the company’s first Gigafactory battery plant in the Nevada desert.

The new facility at the edge of the town of Sparks, east of Reno, will build Tesla’s future battery cells and packs for all of its products. In addition to the gargantuan building itself, Tesla plans to aggressively increase vehicle production by more than ten times over the next few years from just under 52,000 units sold worldwide last year.

Party attendees toured key areas of the initial battery cell manufacturing lines that are still under construction and also walked through the area where stationary energy storage products are already being assembled.

An open bar, good food, air conditioned tents, and test rides in the existing S and X car models kept attendees happy while waiting. A single Model 3 design mockup car was available for viewing. Halfway through the evening, CEO Elon Musk and CTO J. B. Straubel took the stage away from a rock band and talked about the new factory and its role in Tesla’s future plans.

The Gigafactory is being constructed in phases as separate adjacent buildings that will later be joined together. Three of these buildings are mostly complete although some interior walls and features are still being finished while equipment is being installed. A fourth building exists as a structural skeleton but is not yet fully enclosed. Tour shuttles drove through its hollow interior ground floor.

Musk said the new Gigafactory will be the world’s largest building by footprint and the second largest by interior volume. Tesla’s hill-covered land at the site had to be flattened for the new factory by moving nearly three million cubic yards of dirt, according to one tour guide.

J.B. Straubel (left) and Elon Musk give a presentation on the Gigafactory to the assembled invitees.

The original target was to produce 35 gigawatt-hours of cells for use in building as many as 500,000 cars at the company’s Fremont, California assembly plant upon the Gigafactory’s completion in 2020. An additional 15 gigawatt-hours of cells were to be imported and used in stationary energy storage products. Tesla officials now say they will be able to build that many cells in 2018 by speeding construction and by improving the interior arrangement of the manufacturing equipment.

The first buildings and battery manufacturing lines are being built according to the original layout plans but the next building phase will follow a redesign developed jointly between Tesla and Panasonic that will have battery equipment lines with twice the area but four-times the output. By increasing space efficiency of battery manufacturing in the factory, Tesla says the factory will now be able to build up to 150 gigawatt-hours of cells at completion in 2020. Although estimates vary, Musk said total global lithium-ion cell production in 2014 was about 30 gigawatt-hours.

The Gigafactory is projected to cost at least $5 billion by the time it is complete. Panasonic will reportedly contribute at least $1.6 billion of that amount. On Friday, Panasonic disclosed that it will raise nearly $3.9 billion by issuing corporate bonds and said much of it would go towards their share of the cost.

The battery plans go together with planned improvements to the assembly factory in Fremont to raise its output in 2020 from an original target of 500,000 vehicles to as many as one million in spite of increasing battery pack sizes in individual cars.

Musk said he initially expects about two-thirds of the factory’s cells will be used in vehicle battery packs and the remaining third will go into stationary storage products. He also said he eventually expects at least one battery Gigafactory and vehicle assembly plant to be integrated together in both Europe and Asia.

Among other items, Musk said plans for a future version of the company’s original Roadster all-electric sports car are on hold until after it focuses on delivering the less expensive Model 3 sedan and a follow-on crossover utility car built on the same platform. The future Roadster update will also take a backseat to recently disclosed vehicle plans such as a minibus people-mover based on the Model X platform and plans for future trucks.

Temperatures reached around 100 degrees F in the afternoon but dropped somewhat as a summer lightening and dust storm moved through and temporarily halted tours. Multiple tour groups of around 20 each were led by pairs of full-time Tesla employees. Photos had been prohibited in many areas of the factory when shown to journalists earlier in the week but were allowed during the factory party tours. Existing Tesla owners won invitations through a lottery and owners who helped sell cars through a referral program were given special perks.

A long oven is used to bake the wet cathode paste onto a continuous sheet of aluminum foil. It runs along the entire back wall of the room and is partially covered in plastic sheeting on the left side. Another oven like it will be added to this room before production begins.

The tour groups were led through factory rooms that will be used to precisely mix and apply a solvent-containing battery cell cathode paste in a continuous process to a thin sheet of aluminum which is then baked in a huge room-sized oven. The solvent evaporates in the heat and is recovered from the oven in a closed-loop process that is not vented to the atmosphere. Recovered solvent is reused to make more cells. Tesla engineers gave a brief presentation to each tour group and said they were able to work with Panasonic to reduce planned energy consumption in the electric oven and solvent recovery system by 80 percent versus ovens used at other Panasonic plants.

The entire factory is intended to be self-sustaining and will be powered entirely from rooftop solar panels and other renewable power sources such as wind. The factory will use Tesla’s stationary storage packs to balance the load and provide continuous power during factory production. Tesla has reportedly said the factory will have no natural gas line connection or diesel generators but will be connected to two different electrical grid lines largely for backup purposes.

A giant roll of aluminum foil with thin baked-on cathode paste layers on each side would be held by the red hubs on this proprietary Panasonic hydraulic press. The pressure rollers themselves are hidden from view by a black plastic tarp. The cathode foil fed through the press is evenly flattened to about half its original thickness.

At a later point in the tour, visitors were shown where the dried cathode rolls are pressed to a consistent thickness. Another large automated warehousing room is used to store tens of millions of completed cells while they age for an undisclosed period of time. Proprietary equipment from Panasonic in some of the rooms was covered by plastic sheeting to guard trade secrets.

Tesla employees said all of the initial battery production would be used for Model 3 battery packs. Battery cells used for stationary energy storage have a somewhat different internal design and those cell lines will be constructed and brought online later. Some equipment at the factory is also dual purpose and can be adapted for making either kind of cell giving Tesla production flexibility as the market for both types of cells evolves.

Initial battery cell production is scheduled to begin in about 6 months at the end of this year once the necessary equipment is completely installed and tested. Those cells will initially be used to be make Model 3 battery packs for engineering development use and testing. The goal is to be ready for volume production as early as July, 2017 although company officials acknowledge that actual production may begin later in the year.

This structure in the cell aging room holds plastic pallets filled with newly made cylinder cells. The pallets are stored and retrieved robotically.

Soon after initial cell production begins, waste material from manufacturing will be used to start testing battery recycling techniques at the factory. Eventually, Tesla plans to fully recycle the battery cells recovered from vehicle packs at the end of their useful life. Tesla employees said the raw materials can be recovered and reused for new cells at less than the expected cost of new raw materials. Raw materials are said to constitute a large part of the cost of making cells.

Both the vehicle and future stationary storage cells are being made in a somewhat larger physical cell size than Tesla has previously imported from Panasonic in Japan. The previous size, known as 18650, was originally used for laptop computers and was widely available from multiple manufacturers when Tesla first designed its Roadster sports car and later it’s Model S sedan and Model X SUV.

For the Model 3 and the new Nevada factory, Tesla and Panasonic revisited the assumptions behind that cell size and decided that a 21700 size would provide a more optimal balance of energy density and other factors. The first two digits are the cell width in millimeters and the last three digits are the cell length in tenths of millimeters. Samsung has recently announced plans to use the same size to power electrically assisted bicycles. Internally, Tesla is said to refer to the new cells as “21-70.”

The top cover has been removed from this stationary storage battery tray to reveal the cells within it and the battery management circuit board.

Since initially produced cells will go to the Model 3, the Model S and X along with the stationary energy storage products will continue to use imported 18650 cells until they are switched to the new form factor. Tesla has reportedly already designed prototype S and X battery packs which can use the new slightly taller cells while preserving the exterior size of the pack for compatibility although employees at the plant could not confirm that story.

The rooms in the new factory will be carefully cleaned of dust before factory operations begin later this year, and workers will need to walk through “dust showers” that use compressed air through an array of nozzles to blow potential contaminants from their uniforms.

Today about 1000 construction and other employees are working at the factory site and about 70 percent of them are hired from within Nevada. At its peak in 2020, Musk said the factory may employ as many as 10,000 which is up from the original estimate of 6,500.

Tesla presently has two stationary energy storage products sold under the Tesla Energy brand. The smaller Powerwall has a rated capacity of 6.4 kilowatt-hours of storage and can be mounted on an interior or exterior wall. The cabinet sized Powerpack has a rated capacity of around 100 kilowatt-hours. Inside each Powerwall is a single liquid-cooled flat tray holding cylindrical 18650 battery cells important from Panasonic in Japan. For simplicity of manufacturing, the Powerpack contains 16 of these same trays stacked in an electrical utility cabinet. In the future, Tesla plans to switch to using the new larger cells which will be made in the Nevada factory.

An assembly line employee prepares to move a Powerpack filled with battery trays.

Visitors touring the stationary storage production line saw a mix of robots and workers assembling the battery trays and then packaging them into the final cabinets. Finished products packed for shipping to early customers were stored on the floor and in warehouse-style racks nearby.