The Influence of Ionic Contamination 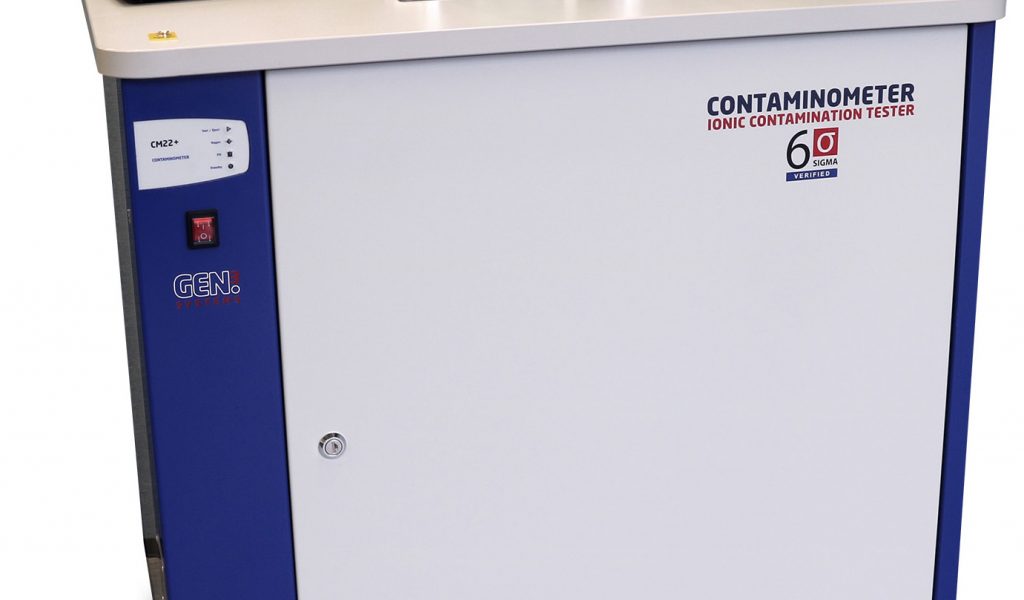 An important update in contamination testing, converting ROSE to PICT 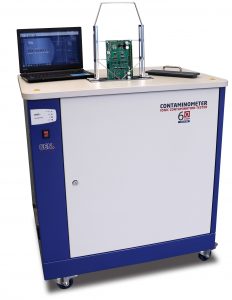 In the 1970s a technique was developed that measured the conductivity of a solvent water mixture that had been passed over printed circuit assemblies (PCAs). Ionic species that are dissolved into solution change the measured conductivity. This measurement was therefore an indicator of mobile ionic species. Although the initial concept was to use the technique as a process tool, it was taken and applied in a cleanliness measurement role. For many years, military (e.g. MIL-STD-2000) and commercial (e.g. IPC-J-STD-001) manufacturing standards have required manufactured circuit card assemblies (PCAs) to meet an ionic cleanliness requirement of 1.56 microgram (μg) of sodium chloride (NaCl) equivalence (=) per square centimetre (cm2) of extracted surface. This technique became known as Resistivity of Solvent Extract (ROSE) testing, and is documented today in IPC-TM-650, method 2.3.25.

Applying this criterion of 1.56μg/cm2 to a flat featureless and uniform surface, such as a bare board, has definite merit. However, this is far too simplistic for an assembly with a wide range of complexity, a multitude of variously shaped components, a range of critical feature sizes, varying number of solder joints, and manufactured with a range of flux types and different material sets. Measurements of the flux residue raise an interesting challenge, since the inception of the 1.56 value the number of components within the flux package have been changing, as has the base chemistry, with the most notable change being the introduction of no-clean systems. How can one value catch all the possible diversity and intricacy found on PCAs. Since the ROSE technique is an averaging approach, it cannot reflect the widely varying contribution from different areas of a PCA. Hence, any value from the ROSE test on assemblies has doubtful merit in indicating the suitability of a manufactured PCA. It will not identify and characterise the weak points on the PCA.

Since a single value cannot be the benchmark for such a wide range of PCAs, it is meaningless to discuss a “cleanliness level”, as hitherto been the case. The wider industry’s lack of appreciation of the methodology used in the ROSE technique and how to interpret the outcome, has led to the over simplistic view of a ‘one size fits all’ cleanliness standard. Hence, there is often poor understanding of what this test does and does not tell you.

As mentioned above, the test was originally developed in the 1970s; it was never intended to be used as a cleanliness test, nor as a test for product acceptability. It was only intended to be used as a process control test. The use of the ionic contamination value as a measure of product acceptance was the result of the US DoD desire to implement a pass/fail criterion. However, since that point in history modern assemblies have become far more complex to have a single ‘one size fits all’ cleanliness criterion.

As we have argued above, it is fallacy to apply the 1.56 value without knowing the shortcomings of the method. Consideration should be given to the complexity of the PCA product. What should happen is that an independent correlation study be carried out that shows a ROSE value to be an acceptable discriminator between acceptable and unacceptable levels for hardware or product. Therefore, higher values than 1.56 can be shown to be acceptable, with product achieving target lifetime performance.

ROSE testing is an extraction based test and is based on the solvency of the residue, the dissolved ionic content, circulation rate of the solvent, temperature and exposure time.

ROSE testing, at its heart, is an extraction based test and is based on the solvency of the residue, the dissolved ionic content, circulation rate of the solvent, temperature and exposure time. Hence, not all residues are extracted and detected to the same degree by all ROSE testers. Test times are also finite and potentially not everything has enough time to be extracted. Therefore, with an implicit variability between ROSE testers, a single value pass/fail criterion will lead to different outcomes relating to a pass/fail level. Hence, the potential for unforeseen reliability issues arise.

ROSE tester efficacy is also an issue. If a particular instrument is weak at extracting ionic residues, then it is more likely to pass product. Issues such as system circulation rate, the conductivity cell efficiency and so on, are all important parameters. This efficacy problem is another reason for not adopting a universal cleanliness level, but rather pursuing an independent correlation test and setting a specific value for that ROSE tester.

Issues such as system circulation rate, the conductivity cell efficiency and so on, are all important parameters. This efficacy problem is another reason for not adopting a universal cleanliness level, but rather pursuing an independent correlation test and setting a specific value for that ROSE tester.

Committee’s today at IPC and IEC are working with the intent to make the value of 1.56 μg/cm2 = NaCl obsolete. In its place a new standard is being written, adopting a similar approach using the measurement methodology to previous ROSE methods, but now the new test method approaches the subject from a process control perspective, and the test will be known as “Process Ionic Contamination Testing” (PICT).

The PICT method is a very well defined method to help control both the bare board and subsequent assembly process. Gen3 Systems with Robert Bosch undertook a study using the CM+ systems and applied a verification procedure at different production sites worldwide. The Gen3 Systems CM+ instrument range was proven to meet the Robert Bosch 6-sigma criterion for reproducibility. This performance allows for the optimisation of manufacturing techniques and m aterials, and manufacturing control across different production sites globally, with a high level of certainty. The approach therefore circumvents the difficulties discussed above in the ROSE method. The Gen3 Systems instruments perform this role, monitoring the manufacturing process.

This latest result was a joint presentation on this subject that was given by Robert Bosch and Gen3 Systems at the IPC APEX event in San Diego in February 2017.