The rise of Foxconn and Terry Gou, and shaking the Apple shackles 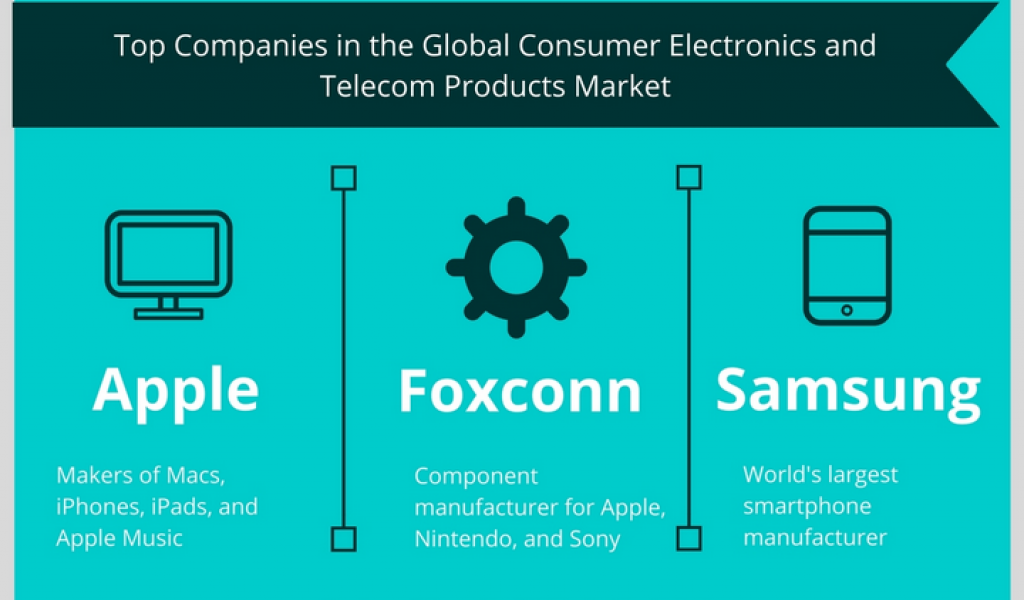 Foxconn has had an astonishing rise in the electronics industry. The Taiwanese company has gone beyond electronics manufacturing and assembly to become one of largest companies in the world.

Fortune ranks as the world’s 27th largest company, but just how big can Foxconn become?

Since the iPhone’s introduction in 2007, Apple has relied on the company known as Hon Hai Precision Industry, which trades as Foxconn Technology Group, to assemble its devices at plants in China and Taiwan.

Foxconn is the largest contract manufacturer in the world. Established in 1974 by the legendary Terry Gou, who still retains control, its workforce of more than 700,000 employees (rising to over one million during busy times) assembles components for devices including the iPad, Kindle, Playstation 4, Xbox One and Nintendo Switch, along with TVs.

The company is a true empire, with at least nine major business arms via a string of subsidiaries and associated companies in fields like printed circuit board manufacturing, touch module and battery module manufacturing, nanotechnology, connector manufacturing. Subsidiary company FIH Mobile is devoted to non-Apple phone manufacturing.
Apple dominates Foxconn’s facilities and bottom line, receiving millions of devices (mostly iPhones) every quarter from the company. The two companies are the biggest buyers of tech in the world, spending more than $250 billion last year on a cost-of-goods-sold basis.

Apple is Foxconn’s most significant client by some margin, dating back to 2000 when Foxconn won an order to produce Apple’s new iMacs. It’s also been an infamous partnership.

The manufacturer caught the attention of the world’s media following a spate of worker suicides in 2010, mostly in the giant Longhua complex where iPhones are made, and where workers also live.
Nets were installed outside many buildings, and counsellors were hired. Apple came under fire for contracting work to a company supposedly making its employees suffer.

“Foxconn is not a sweatshop. It’s a factory. But my gosh, they have restaurants and movie theatres[…] For a factory, it’s a pretty nice factory. If you count the attempted suicides, they’ve had 13 this year. You know, they have 400,000 people in that place[…] That’s still under the U.S. suicide rate […] but it’s really troubling,” said Steve Jobs in an interview with Walt Mossberg and Kara Swisher in 2010.

Foxconn didn’t suffer much from the media spotlight. The company managed to maintain and grow its fortunes, and its relationship with Apple.

In recent years, reports have continued to spotlight the ambitions of Foxconn’s maverick founder and his company. One of the most recent, in the Nikkei Asian Review, published a rare in-depth conversation with Gou, focused on the attempted purchase of Toshiba’s memory chip business in Japan for as high as $19.5 billion, the ‘big brand’ ambitions of the company, and Gou himself.

It is clear that assembling iPhones is not and has not been enough for Terry Gou for some time.
‘The Chairman’ Terry Gou

Gou is the heart and soul of the business he’s driven since 1974, and remains in tight-control of the company. It’s growth is a reflection of his tenacity. He recently won control of Osaka-based Sharp, the first ever foreign takeover of a Japanese electronics company. Sharp was Japan’s largest maker of liquid-crystal displays at the time, and a major supplier to Apple for pre-iPhone X devices.

In its detailed post-mortem of the deal, Bloomberg described Gou as “relentless, totally relentless.”

A profile from BusinessWeek includes many of Gou’s tenacious moments in working to create his 43-year-old company that started from humble beginnings, via a $7,500 loan from his mother.

Stories of “Terry the Talker,” a man so determined that he could convince anyone to work with him, abound. He supposedly convinced representatives from Compaq to order computer casings from Hon Hai— the company had only ever made connectors at this point— just by drawing out some plans in the parking lot of the Longhua grounds.

Foxconn’s appetite for growth remains driven and focused by the 67-year-old Gou. While he has reportedly spoken of a plan for retirement, there isn’t a clear successor for the company, and a search has apparently been ongoing for at least a decade.

Gou remains firmly at the helm, and is actually pretty youthful compared to others in the industry: Canon Chairman and CEO Fujio Mitarai is 82. Morris Chang, a legendary figure in Taiwan’s chip industry, returned to TSMC as Chairman and CEO in 2009 at 78. He’s 86 now and still Chairman.
Many Taiwanese companies are family controlled, and have faced or still face a succession crisis, including computer manufacturers Acer and Quanta. Sophia Cheng, former head of research at Merrill Lynch Taiwan Ltd., said a major criteria in judging company performance in Taiwan is how well the first-generation of leadership plan for succession by the next generation.

Foxconn has reportedly seen high-turnover as executives struggle to match Gou’s expectations, commitment, and leadership style. Gou reportedly does not delegate, retaining tight control of all aspects of the business. Gou’s temper is also famous, and has been reported on for decades.

According to a former high-level executive, “The better you do, the more difficult he is to please.”

Gou’s five children have reportedly shown little interest in the company, or are too young.
The margin troubles, and Apple

Foxconn’s formidable growth on the back of continued success and delivery for Apple isn’t straight-forward. Revenue remains strong, but profitability dwells in a narrowing margin:

Foxconn’s gross profit margin, according to the company’s financial reports, has fallen to as low as 5.83%. (Major electronics players that utilise Foxconn such as Apple, Sony, and Nintendo have margins of around 40%.)
.In 2016, Apple alone accounted for 54% of Foxconn’s revenue of US$142 billion.

In the most recent financial release by Foxconn, the company experienced a downturn in revenue that analysts suggested was due to iPhone X supplier problems.

Foxconn’s model has been to sell its manufactured parts for customer devices, and do the final assembly at a thin profit, or even a loss.

Gou is famous for focusing on a five-year plan, and there are few better placed to see both short and long-term trends in the industry, but well-reported delays in iPhone X production due to third-party component issues hurt not just Apple and their consumers, but Foxconn as well. Initial sales of the iPhone 8 range were tepid, too, and inventories are rising.

Apple looks safe to to continue their hot streak, selling more than 40 million iPhones over the last 12 quarters, but global smartphone sales are slowing. India is contributing major new demand, but for low to mid-range devices with less of a margin.

Another headwind is the growth of Chinese OEM Huawei, which is now the third-largest manufacturer of smartphones, and handles manufacturing and assembly internally.

Investors aren’t convinced about the iPhone X’s sales power at all, with Foxconn’s shares tumbling some 20 percent from the September 12th Apple keynote, while Apple itself is up around eight percent from that date in a serious bull market.

A perceived hiccup to Apple results in significant pain to Foxconn, but changing this course is not simple.

“Foxconn still cannot do without Apple in the future. Apple orders have become too big to lose for Foxconn,” Yuanta’s Vincent Chen told the Nikkei.

The broadening of the brand

“Not competing with customers has been a key part of Foxconn’s strategy … and in most cases it has more to lose than gain in putting its brand into competition with those of its customers,” said the analyst. Foxconn didn’t immediately respond to our request for comment, so their ambitions in this area remain unclear.

Foxconn controls Sharp, which releases mobile devices in China like the bezel-less Sharp Aquos S2. It also produces a range of InFocus mobile phones, under the US-company InFocus brand. Via FIH Mobile, it owns the rights to manufacture low-end phones under the Nokia brand too.
Aside from investments in emerging companies, which are often made to secure relationships as much as technology, Foxconn’s also a major participant in Softbank’s Vision Fund, alongside Qualcomm, Apple, Saudi Arabia’s main sovereign wealth fund, and others.

In the US, a major agreement has been signed between the state of Wisconsin and Foxconn for the company to invest up to $10 billion, for a 13,000-job development, likely focused on LCD-panel production for TV. The plant will build 10.5G LCD substrates (display panel sheets), able to produce 8K resolutions on panels as big as 70, 80 and 100-inch TV screens.

The future for Foxconn: TVs, OLED, and more than electronics

Foxconn’s 10.5G LCD plant foray into Wisconsin is a risk, although Gou has secured significant (and controversial) tax breaks and leniency from the state of Wisconsin.

Bloomberg Gadfly columnist Tim Culpan opined that the Foxconn development would be a risk for both Wisconsin and the company. The relatively high supply of quality LCD panels in Asia— including Foxconn’s own twin 10.5G plant being built in southern China— will hurt margins, and the huge breaks given to Foxconn which may not be paid back to Wisconsin for decades.

One obvious area Foxconn is lacking is in true OLED capacity in both TVs and smartphones, where Apple has shifted with the iPhone X. The control of Sharp has added some capacity but nothing of the type or quality that could offer a new supply for Apple’s speciality OLED screens.

Foxconn is lacking OLED capacity in both TVs and smartphones. Control of Sharp has added some capacity but Samsung and LG are skeptical that Sharp could even start mass-producing OLED as late as 2020.

To join Samsung in supplying OLED panels to Apple, Foxconn would have to spend at least $11.5 billion to build a latest generation 6G OLED plant, which would produce approximately 250 million 6-inch screens per year, tooled from a supplier such as Canon Tokki, according to an analyst who wished to remain anonymous. A project like that would also cause long lead-times, and bring significant technological risk.

“Besides Samsung Display, Apple has been supporting LG Display as the leading alternative OLED supplier for its iPhone,” WitsView research vice president Eric Chiou, told us via email.

“Foxconn-Sharp lack the experience in volume production of OLED panels and have limited capital to invest in this area. Overcoming these difficult challenges will not happen within a short-term period. Pursuing OLED for them is not an efficient use of resources given the time and financial constraints,” said Chiou.

Both Samsung and LG are skeptical that Sharp could even start mass-producing OLED as late as 2020.

Chiou says the focus on TVs by Foxconn-Sharp is far more significant for the company, explaining that the high-price of TVs in general can be major contributors to overall revenue growth. “With its TV business reaching a new level of economies of scale and cost competitiveness, the Foxconn Group can receive an even greater volume of ODM [original design manufacturer] orders and will not be limited to working for the Sharp brand,” said Chiou.

Foxconn is looking to expand into TVs, internet of things, big data, and cloud computing.

Hinting at further ambitions, Foxconn may be aiming to receive Apple Watch assembly orders in 2018 as well.

Foxconn is also said to be exploring manufacturing outside pure electronics, with healthcare, automobile and artificial intelligence sectors all targets.

Gou and Apple will remain the two outstanding pillars of Foxconn’s success, and any upheaval to Gou’s rein or Apple’s relationship to the company threatens its continuing growth.

The company is betting heavily on electric vehicles, TV, and continuing to invest in a range of start-ups and bigger companies to win new work and make sure they’re part of the next big thing. Contract assembly will continue to drive Foxconn’s bottom line, but high technology and brand value might deliver its next major leap in growth.