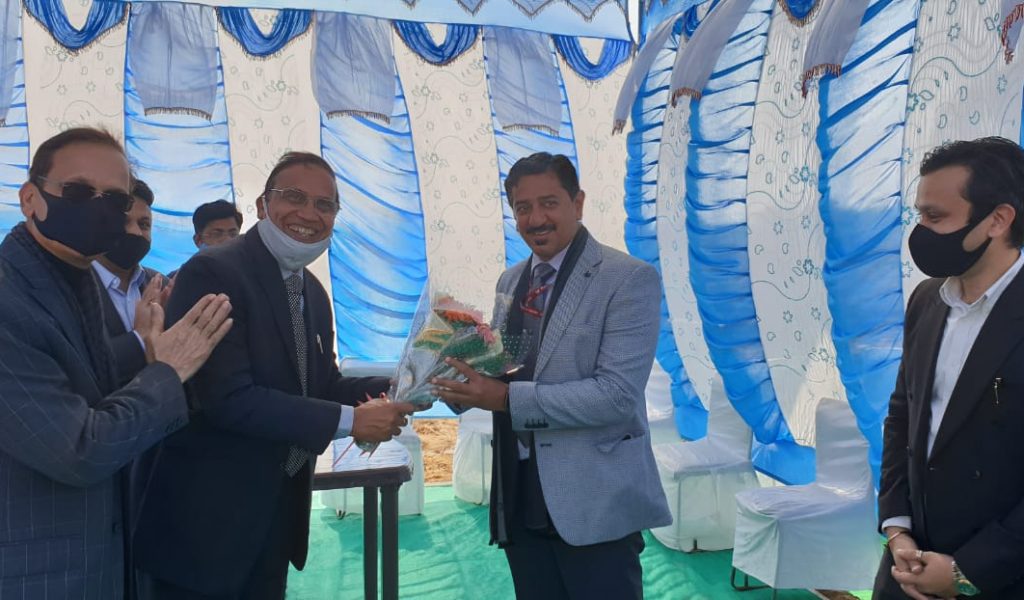 On 14th January 2021, the auspicious day of Makar Sankranti, Sahasra group commenced construction of its new subsidiary Sahasra Semiconductors’ plant in ELCINA Cluster at Bhiwadi, Rajasthan. This is the first cluster project launched by members of ELCINA, under the Electronics Manufacturing Cluster Scheme 1.0 of National Policy on Electronics 2012 of Ministry of Electronics & IT, Government of India.

Foundation stone was laid by Shri Saurabh Gaur, Joint Secretary, Ministry of Electronics & IT, Government of India, in the presence of other investors in the cluster and key stakeholders. Sahasra Semiconductor plans to commence operation later this year with over 100 employees and a total capital outlay of about Rs. 150 Crores.

Sahasra Semiconductors plans to package NAND flash memories that will find application in Mobile phones, Laptops, Notebooks, iPads, data storage Servers, Solid State Drives (SSDs) and other IT products. The company has been approved to receive Government incentives under the PLI scheme under the Electronic Components vertical, notified by the MeitY, Govt. of India. Electronic Components & products market is set to grow at 25% annually for the next 5 years and the company expects to grow its revenue to well over Rs. 1000 Cr in the next 5 years.

Shri Saurabh Gaur congratulated Sahasra Group for taking a bold step in making the country self-reliant in Semiconductors with first of its kind ATMP & OSAT plant to be set up in NCR.  He assured the industry delegates present that Government is committed to initiatives towards “Ease of Doing Business” and for working with the Electronics Industry to become a major manufacturing hub for the Globe.

Chairman of Sahasra Group, Mr Amrit Manwani, conveyed his sincere appreciation for the support provided by MeitY accepting the project under the PLI Scheme and also thanked Government of Rajasthan, specially RIICO and Bureau of Industry Promotion for their unstinted support. BIP has accepted the project for support under their Special Package applicable for projects with investments over Rs 100 Crores.

Simultaneously, Chairman Mr BL Bothra of East India Group, a major investor in the EMC, announced and launched their mega project for manufacturing Room Air Conditioners at the ELCINA Cluster by their flagship company, E-Pack Durables Solutions Pvt Ltd (EDSPL). The company is the 2nd largest manufacturer of RAC’s in the country with a turnover of Rs 1200 Crores. They would invest over Rs 100 Crores in Phase-I and generate employment for 800 persons. Shri Saurabh Gaur planted a sapling at the site of the unit on the special occasion and their Foundation Stone has also been laid on 15th January. The project would be up and running soon and start commercial production within next 6 months, manufacturing AC’s for the top Global and Indian brands.

ELCINA has set up a Greenfield Electronics Manufacturing Cluster (EMC) at Industrial Area Salarpur in Bhiwadi, Rajasthan, which is 71 Km from IGI Airport in Delhi. It is the country’s first EMC which is being developed as a “Co-operative Project” by ELCINA members under the Ministry of Electronics & IT’s Electronics Manufacturing Cluster Scheme of 2012. The Phase-I of the Cluster project is spread across 50.34 and it is being developed in 2 phases of 50 acres each. Till date, 20 companies have invested in the Cluster and they are shareholders of the Special Purpose Vehicle (SPV) which is developing this project.

This greenfield EMC project was conceived way back in 2011 by the Association Members with a view to overcome infrastructure disabilities and achieve cost efficiencies and competitiveness to stem the inflow of Chinese electronic products which have been flooding the Indian market. The objective of this Cluster and the EMC scheme is to provide a competitive and cost effective infrastructure for electronics manufacturers who face zero Import duties under the ITA-1 Agreement of WTO and compete successfully with global competition. This now aptly gels with the Honorable Prime Minister’s ATMANIRBHAR BHARAT ABHIYAN.